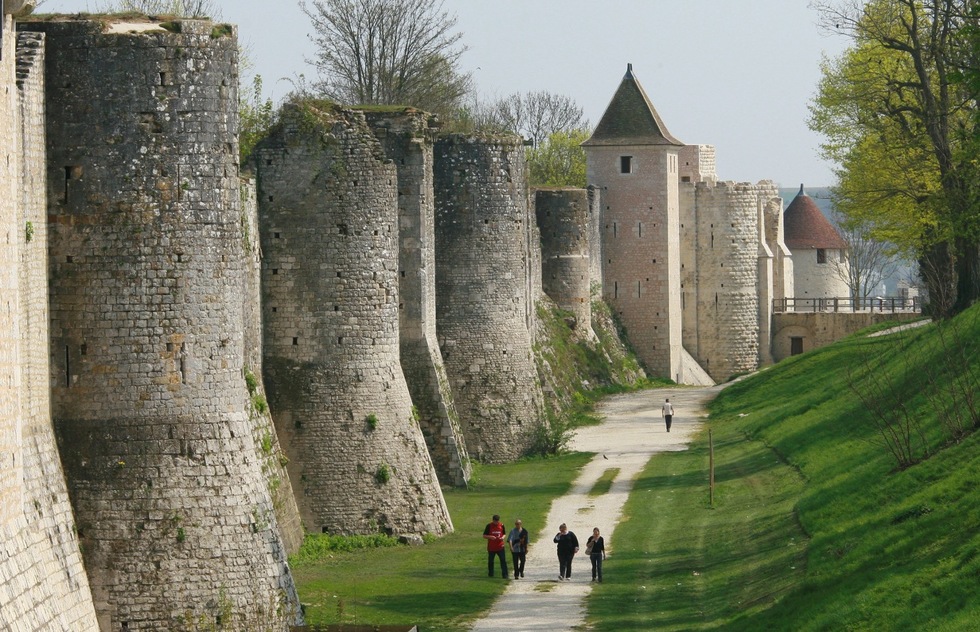 Paris Day Trips Beyond the Ordinary—And Without the Crowds

There are so many incredible places to visit in Paris, and you're not the only one who knows it. In high season, you'll definitely have company lining up at the Eiffel Tower, Notre-Dame, or the Louvre. Don’t let crowds ruin your vacation. Take a breather (and a breath of fresh air), by leaving the masses behind on a day trip to one of these classic, less-visited sites (like Provins, pictured) that go beyond the overburdened excursions to Versailles, Chartres, Mont-Saint-Michel, and Reims. 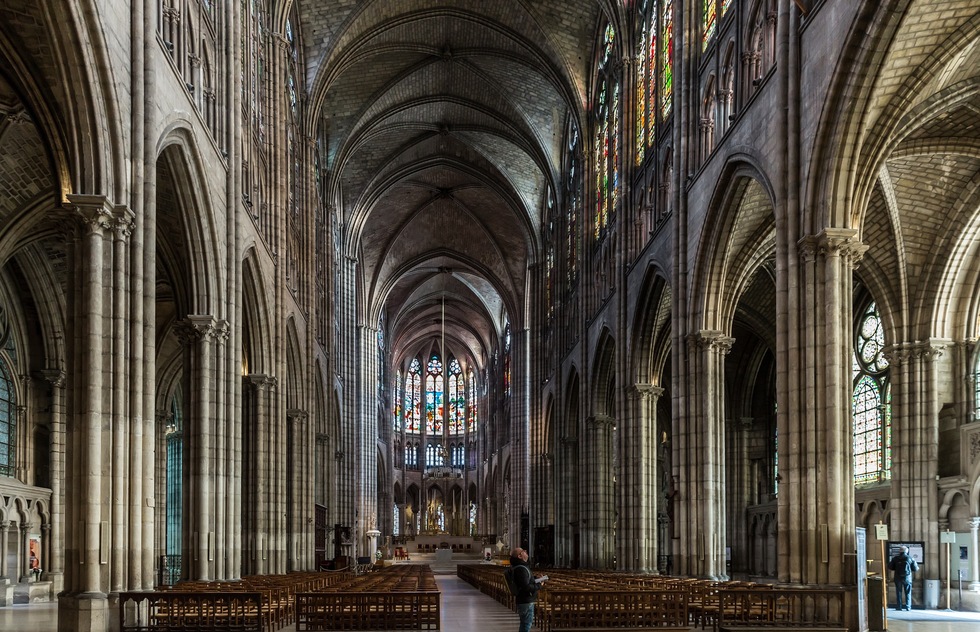 There’s no denying that Notre-Dame is mind-blowingly beautiful, but with a whopping 14 million annual visitors, it’s swamped in high season and ranks as the most visited site in Paris. Flee the masses by discovering where the Gothic style was born, the Basilica of Saint-Denis, found just north of the city’s borders. Begun in the 1130s and considered the first Gothic church, the Basilica rests upon the presumed burial site of France’s first saint, Denis. As such, this became an important pilgrimage site and a sort of necropolis for France, containing the remains of all but three of the kings who reigned from the 10th century through 1789. Anti-monarchy Revolutionaries tossed those bones into a mass grave outside the church in 1793, although they were later gathered into an ossuary in the crypt. Fortunately, most of the royals' elaborate tombs didn’t meet the same fate, and their effigies make a curious complement to the Basilica’s architectural heritage.

Getting There: Open daily with varying hours (full details here), the Basilica can be reached from central Paris in 30–40 minutes via Métro line 13 to the Basilique de Saint-Denis station. It’s a short, well-signposted walk from there. 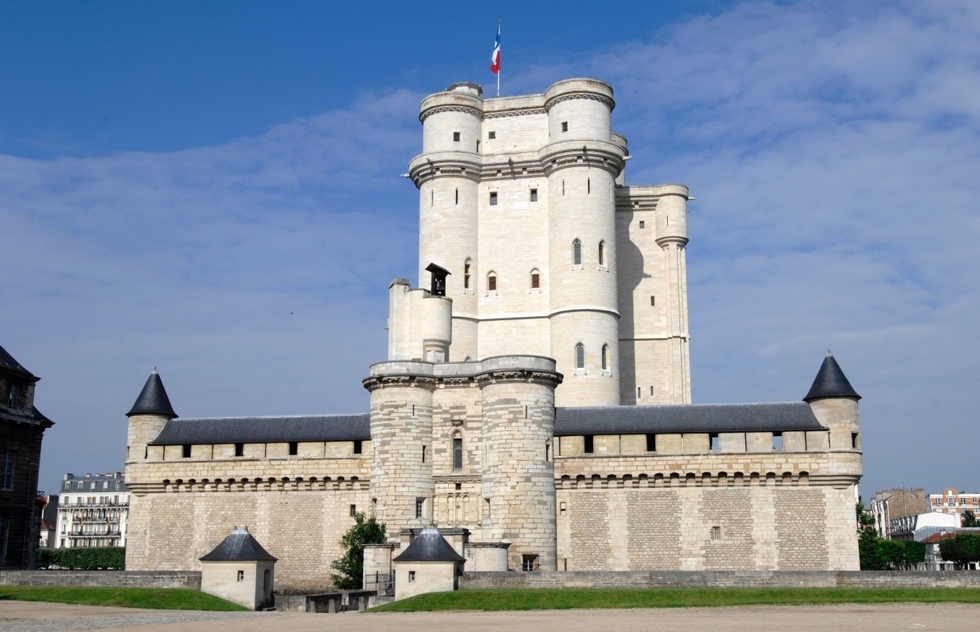 Another Métro ride will take you to one of the most interesting historical sites in Île-de-France. In the late 1300s, King Charles V expanded a former royal hunting lodge dating to the mid-12th century by added a massive defensive donjon, the tallest in Europe at 52 meters (171 ft). Nobles spent bouts of time here over the centuries, including Louis XIV during his childhood, yet it was denied the refurbishments given to other castles. The donjon itself also served as a prison, detaining such infamous inmates as the Marquis de Sade and Louis XIV’s rival Nicolas Fouquet. After visiting the castle, you can spend the afternoon in the sprawling Vincennes Woods nearby. The vast park has a large network of paths, a lake where you can rent boats, a botanical garden, the Parc Floral de Paris (which hosts open-air jazz), and classical music concerts in summer.

Getting There: Open daily (see hours and ticket prices here). Take Métro line 1 to its eastern terminus, Château de Vincennes. The castle is right outside the station. Alternatively, the RER A station of the same name is a few blocks away. 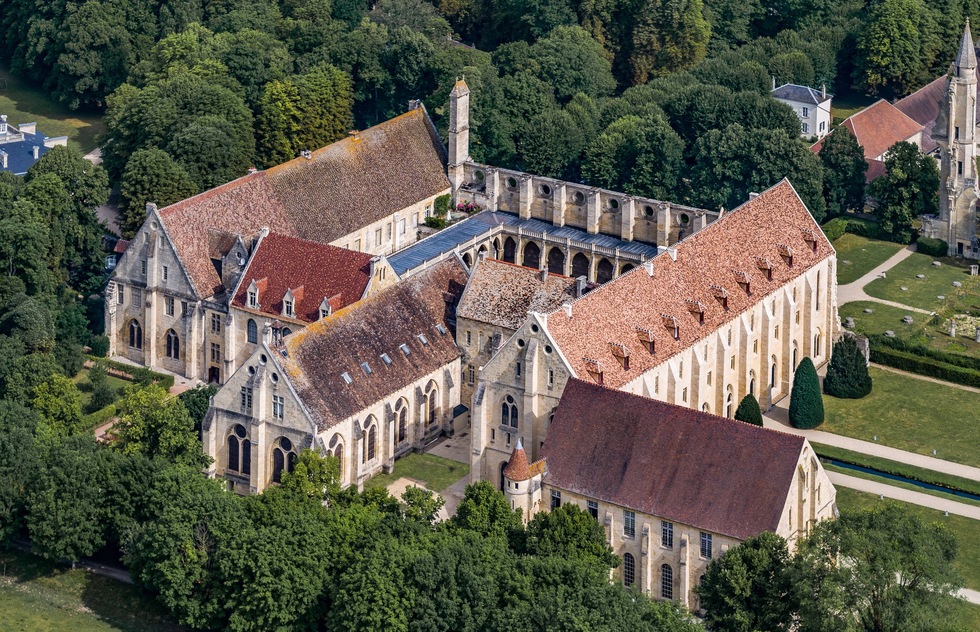 France has some exquisite medieval abbeys, and this outstanding one happens to be located a short jaunt from Paris. Saint Louis (King Louis IX) founded the abbey in 1228 but left his equally pious mother in charge of the construction of this simple yet graceful Cistercian monastery. It had strong ties to the monarchy until the Revolution, after which it was turned into a cotton mill, then a theater popular with Parisian socialites from 1834 to 1840. During the first World War, it served as the Scottish Women’s Hospital, caring for more than 10,000 wounded soldiers. Luckily, it was classified as a national monument and saved from destruction in 1927.

Getting There: Open daily (hours and details here). The abbey is about an hour's journey from Paris' Gare du Nord, where you take a suburban train to Viarmes (line H in the direction of Luzarches). The Abbey is 5 km (3 mi) from the station and can be reached via shuttle buses (available during peak season) or a 10-minute taxi ride. 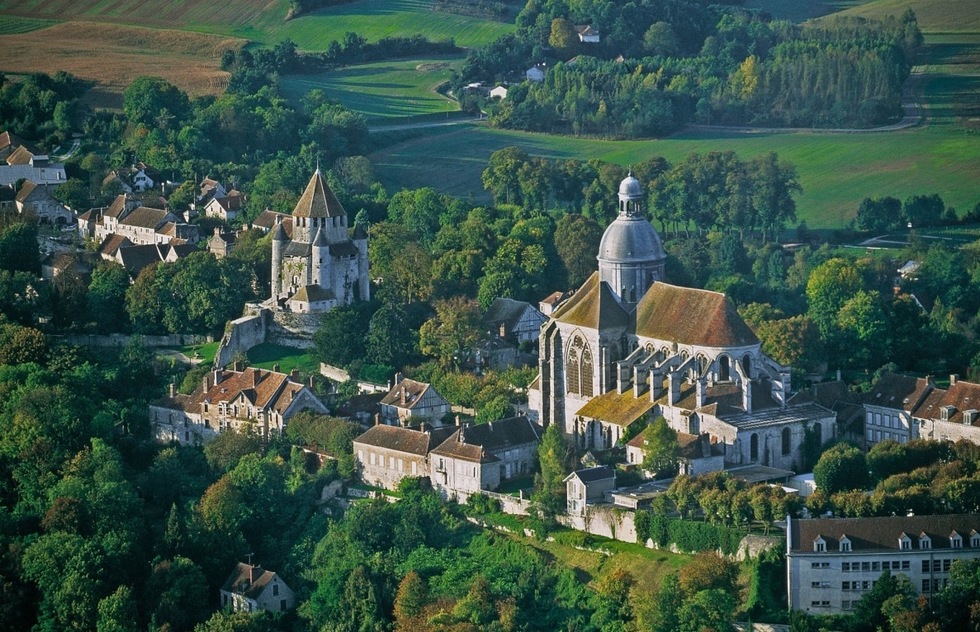 If a medieval church, castle, or abbey isn’t enough, how about a whole medieval town to yourself? This picturesque village, a UNESCO World Heritage Site since 2001, prospered in the Middle Ages thanks to its position as the fiefdom of the Counts of Champagne and from the large fairs held here. That tradition is revived every December in the form of a lively Christmas market. Even if you can’t visit then, you’ll enjoy a fabulous stroll around the historic district with its Tour César fortress, ancient churches, narrow lanes, and well-preserved city walls.

Getting There: It takes 80 minutes by train from Paris-Est to Provins; buy your ticket at the yellow machines, which have an English-language option. The town is accessible by foot from the station. 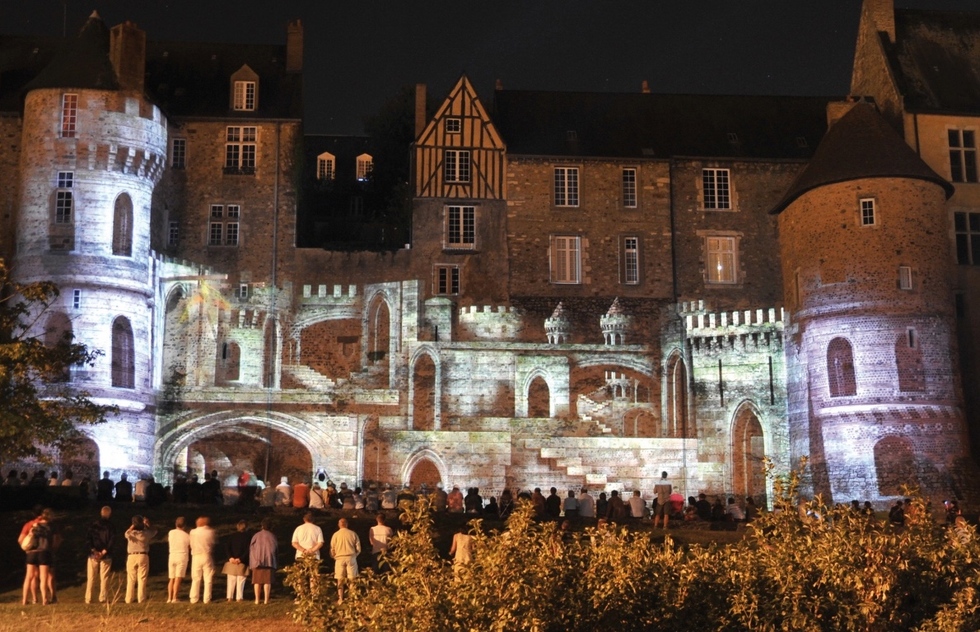 The TGV high-speed train has brought dozens of cities closer to Paris. If you’re looking for something a little different, zoom 55 minutes southwest to this delightful one. Best known abroad from its sports car race held every June, Le Mans has a lot more to offer than revving motors. Encircled by a Roman wall, its charming Cité Plantagenêt is filled with cobbled streets, medieval half-timbered houses, Renaissance mansions, and lively café terraces. Be sure to pop into the vast Romanesque-Gothic Cathédrale Saint-Julien du Mans, one of the largest cathedrals in France. If you visit in summer, you may want to stay overnight to catch the dazzling La Nuit des Chimères (pictured above), a colorful light show in the historic center.

Getting There: Several 55-minute high-speed TGV trains depart daily from Paris Montparnasse station to Le Mans. Check the schedule on the SNCF site in advance; otherwise you may be stuck on the slow two-hour train. 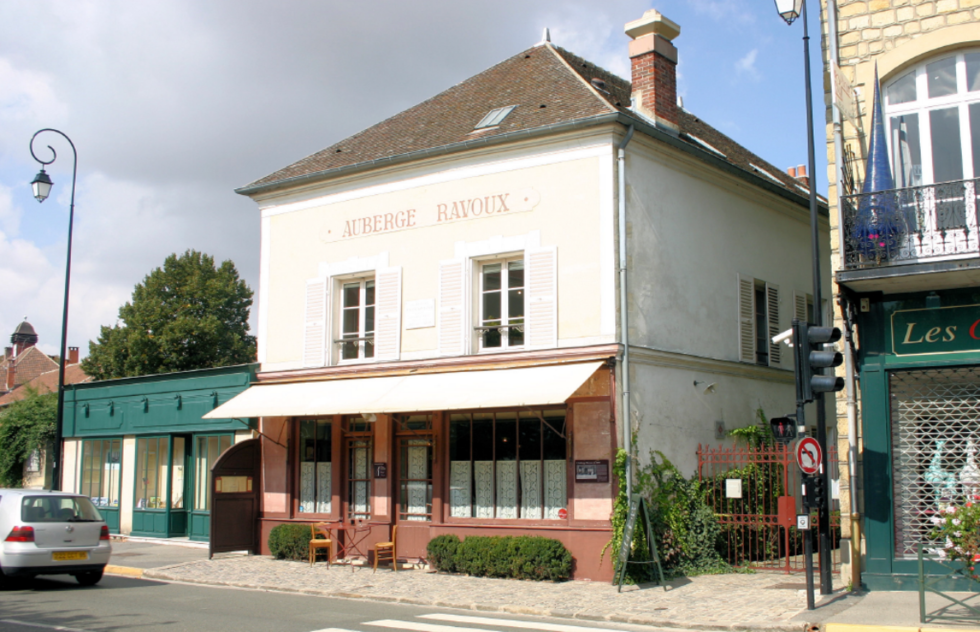 Many 19th-century art fans feel obliged to make a pilgrimage out to see Monet’s home and garden in Giverny—only to be overwhelmed by the site’s fierce crowds rather than its beauty. An excellent and possibly more interesting alternative is Auvers-sur-Oise, the final residence and resting place of Vincent van Gogh. A visit to this frozen-in-time village is like entering one of the troubled artist’s paintings. Indeed, as you stroll the quiet streets, you’ll pass places he painted (indicated by helpful panels). You'll also have the chance to visit or grab a bite at the inn where he lodged (pictured) and pay your respects at his grave. The town also has a lovely castle, studios and homes of other artists of the era, and a quirky museum dedicated to the locals' favorite libation—absinthe. If you come on weekends in summer, you may also catch one of the town’s frequent art or music festivals.

Getting There: Much of Auvers is closed November to February, so plan to come from mid-March. There is a train station right in Auvers, a journey to which takes about an hour. From Paris' Saint-Lazare or Gare du Nord stations, take a regional train to Pontoise. Change here for the trains in the direction of Persan-Beaumont and get off at Auvers station. 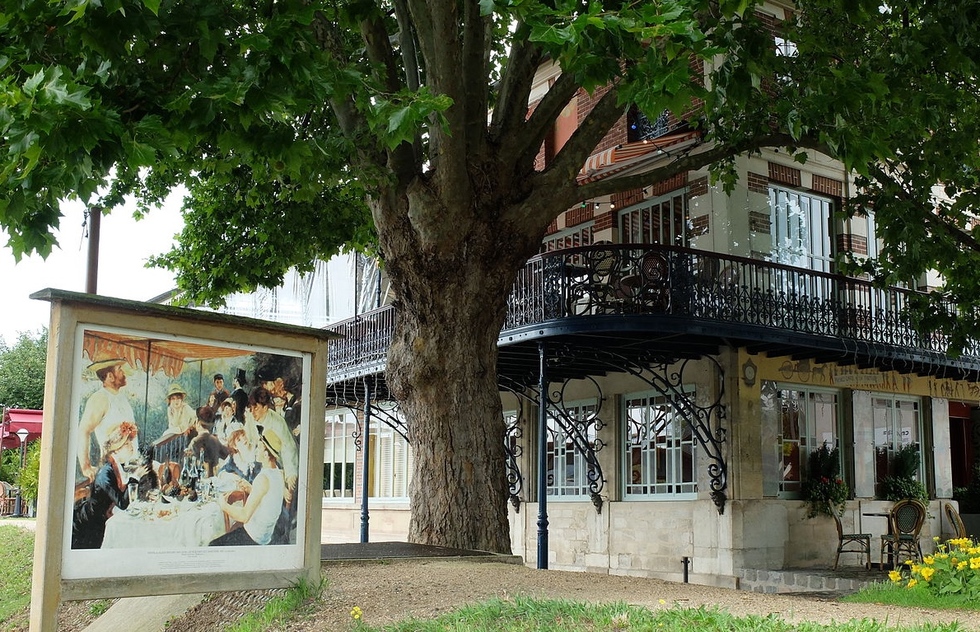 Another option that explores the Impressionist movement is meandering on part of this trail, which traces world-famous artists’ tracks along the Seine, west of Paris. Connecting with nature was essential to many Impressionists, and the picturesque banks of the Seine made for the easiest and closest getaway. This 40-km (25-mi) path travels along the river from Le Pecq to Carrières-sur-Seine and is divided into five circuits. Along the route, you’ll come across panels showing various works in the same place they were painted, like Pissarro’s Le Village de Voisins and Renoir’s Route de Versailles à Louveciennes. You can take a nice walk from Marly-le-Roi to Louveciennes, or start a little further north in Chatou with a casual stroll around the aptly named l'Île des Impressionnistes, where you can take a break at La Maison Fournaise, a favorite hangout and painting spot of artists.

Getting There: More information on the walking routes here (in French). There are various train lines for Marly-le-Roi. The easiest is a direct “L” train from Paris' Saint-Lazare station which takes 35 minutes. The Île des Impressionistes is near RER A in Rueil-Malmaison. 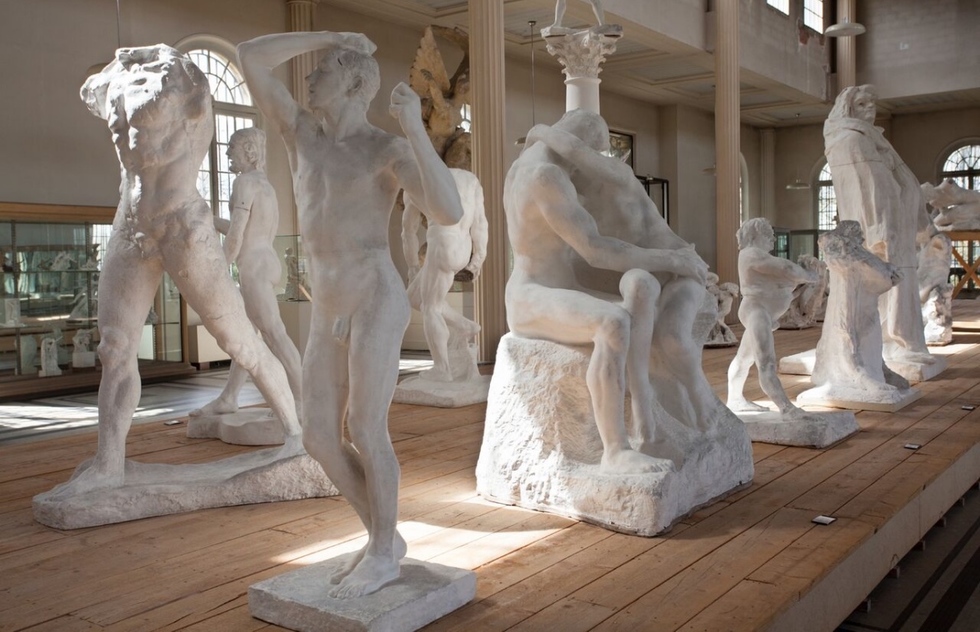 Very few genuine studios used by 19th-century artists still exist—even fewer can be visited. In 1895, Auguste Rodin bought the Louis XIII-style Villa des Brillants in the lofty southwestern suburb of Meudon. The artist himself was at the height of his career, receiving commissions from far and wide, including Britain's King Edward VII. There was so much work to do he employed over 50 assistants, workers, and casters at this large studio. After visiting the inside of the villa, you can drift through the plaster hall to marvel at casts of some of the sculptor's most notable works, such as The Gates of Hell and The Burghers of Calais. Don’t forget to wander in the garden, where you’ll find the artist's eternal resting place, under a cast of The Thinker.

Getting There: The studio is open Fri–Sun 1pm–6pm (full details here). The trip takes 45–60 minutes from central Paris. You can either take Métro line 12 to Mairie d’Issy then bus 190, 290, or 169 to the Hôpital Percy stop, or the RER C commuter train to Meudon Val Fleury followed by bus 169 to the Paul Bert stop. 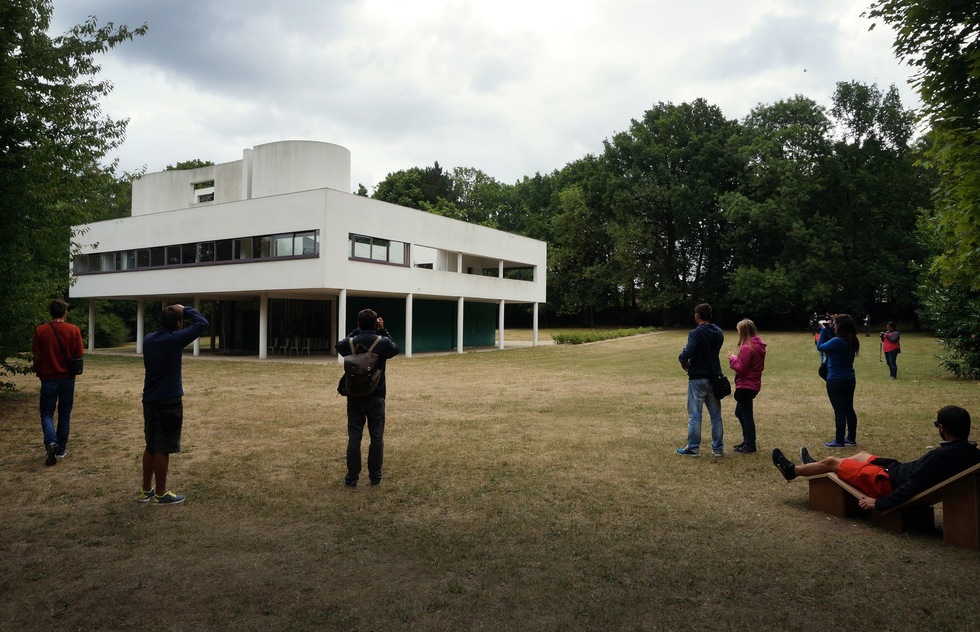 The ideal excursion for modernist architecture fans, this iconic Le Corbusier masterpiece is tucked away in the western suburb of Poissy. Built from 1928 to 1931 as the country home of the Savoye family, the concrete structure incorporates the five fundamental principles of the Modern movement: a base elevated on stilts, an open-plan design, horizontal "ribbon" windows, a roof garden, and a freely designed façade. Eventually abandoned by the family, the villa was bought up by the French state, which embarked on a lengthy restoration starting in 1963. It was listed as a historic monument the following year.

Getting There: Open Tues–Sun (check hours and ticket prices here). About an hour’s journey from Paris by rail. Take line A west to Poissy terminus (be sure to check the trains’ board to get on the right one). Outside the station, take bus 50 in the direction of La Coudraie until the Villa Savoye stop.