Thank you for subscribing!
Got it! Thank you!
Home›Tips & News›Hotels›I've Stayed in Several Hotels This Summer. It Didn't Go How I Expected. 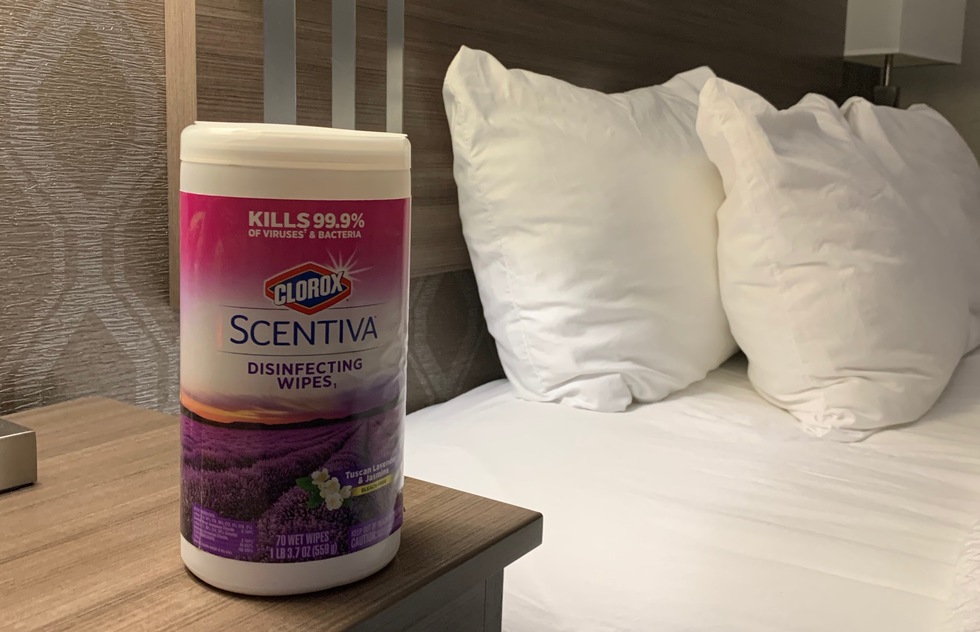 I've Stayed in Several Hotels This Summer. It Didn't Go How I Expected.

A surprising way the pandemic has changed the travel experience is how we relate to hotels now—and it goes beyond cleaning concerns.

Hotels and life have a lot in common: They don't feel like they used to.

Over the past few weeks, I've traveled by road a few times in the United States, and on each occasion, I checked into a hotel. And I'll say it up front: Although I expected to feel anxious about cleanliness, when I was finally on the premises and looking at what was being done, that anxiety went away. I never felt like I had to compromise my personal space or sanitary standards—I always felt in control of my exposure level.

What I noticed most was how our relationship with hotels has changed.

Here's what I learned.

Seemingly overnight, every commercial transaction in the world feels like it's happening in a tollbooth, and check-in desks are no different. Plexiglas sheets don't scream "hospitality," yet they're the first thing a guest encounters at most hotel front desks now.

True, I had no way to confirm the sheets were fresh (unlike Inside Edition, which recently caught several hotels using unwashed sheets), but my rooms did smell scrubbed and soapy, and hand sanitizer was available in common spaces. I brought my own disinfectant wipes so I could go over anything I might touch, like the TV remote and light switches.

As for the other guests, unless they were in the pool or sunbathing at a safe distance, nearly all wore masks—and the people who didn't were easily avoidable.

One hotel I stayed in, a small motel-style property in Palm Springs, had commissioned lots of new signage and floor markers so guests would always have a sense of distance. Another property had eliminated daily room cleanings so guests could feel confident no one else had been in their space.

Still, despite all those precautions—or more likely because of them—I found it was never quite possible to fully relax.

I didn't feel as if I were one unwiped door handle away from infection, but because sanitation was always at the forefront, I did have a nagging sensation that there was some safety measure I had missed.

While that feeling wasn't as sinister as the one you have when faced with a gas station restroom, there remained nonetheless a low-key awareness that a thousand strangers might have been getting germs all over every available surface just 24 hours earlier.

I'm hoping that was just nerves after months of remaining in the safe zone of my own home. As I stay in more hotels, confidence will surely rise while the dread of the unknown fades.

Think about it: Most attractions are closed. Most restaurants and bars in town are closed. And even where they aren't, many travelers don't feel comfortable hanging out in public spaces right now.

With so much of the real world closed to normal business, hotels have become a combination safe space/home base—a place to hunker down in between cautious, close-by explorations. More than once I thought of the airlock in 2001: A Space Odyssey. A hotel now feels like the same kind of fraught buffer zone between safety and the scary wide open.

Inside hotels, amenities have been scaled back considerably. Forget spas, game rooms, and indoor restaurants. Generally speaking, if an activity doesn't take place outdoors, it's unlikely to be offered right now. That's why it's crucial to choose a hotel for the quality of its rooms, not the quality of its amenities, as Frommer's advised in April with our list of 12 new hotel rules for the pandemic.

Hotel parking lots, which used to empty out during the day, are now full around the clock—a clear indication that guests aren't leaving the grounds. In the evening, when guests used to go out for dinner, you can still hear the scamper of families in the hallways and in the rooms above you.

And you can hear those sounds because you're sticking around, too.

You might think that curtailed travel would mean there are some sensational discounts. Believe it or not, no.

Maybe it's because we're in the summer season. Maybe it's because some properties have a lot of losses to recoup following months of closure and depressed occupancy. Maybe it's because many places have chosen to establish capacity limits (one hotel I chose only rents up to 70% of rooms), and owners need to raise prices slightly to make up the difference.

Whatever the reason, you probably won't find the hotel deal of a lifetime right now.

Swimming pools aren't popular just because there's less to do in the outside world. For many people who are finally getting out of the house following weeks of self-isolation, a good pool is the reason they chose the hotel to begin with.

Not all hotels are allowing use of their swimming pools, but the ones that are usually follow social distancing measures. That includes spacing out lounge chairs so there's at least 6 feet between parties.

But decreased lounger density + more guests hanging around = no room at the pool.

Some people rise early just to stake their waterside claims with towels. What used to be something travelers only had to contend with on cruise ships (or at all-inclusive resorts popular with Germans) is now standard summer fare at hotels.

You should also expect your pool time to include lots of awkward moments when you're in the water—without a mask, because how would you swim with one?—and wondering what your red line should be if a stranger floats too close.

This is a change that many of us will enjoy.

Breakfast at an affordable mainstream brand used to be a familiar circus of make-your-own waffles, spilled Froot Loops, and unattended children playing slide-a-slice with the industrial toaster.

No longer. At hotels that provide breakfast, a full dining room is no longer an option. Instead, hotels are more likely to pack up a bag of food for guests to pick up. Maybe you'll get a bagel, a pygmy apple, and one of those laughably tiny muffins. One hotel I stayed in gave me all that plus a warm, delicious tortilla wrap made with egg, bacon, and cheese. A staffer poured me a coffee, and off I went to spend the day in a national park nearby.

If you're like me, you'll love this arrangement. Battling the breakfast line was never the brightest part of a budget stay. (In fact, the banishment of buffets made the list of things we're not sorry the pandemic has changed about travel.) On-the-go meals get your day rolling right away. 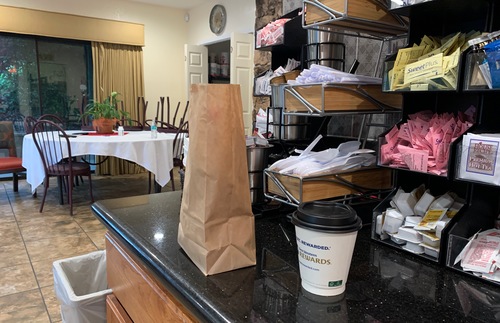 You'll need to pack some extras.

First, bring some disinfectant wipes. Not because I think you'll actually need them—most hotels are aggressively cleaning the things you'll touch—but because using wipes will give you peace of mind and help you sleep better. And anyway, a quick wipe-down can't hurt.

#PandemicLife also comes with other needs. Since so many bars and restaurants are closed or offering limited service, you might end up picking up a bottle of wine and some snacks to enjoy back in the room. Many hotels have removed in-room food and drink accessories because they're shared-touch items, leaving guests without essential tools.

Consider packing a corkscrew/bottle opener, cutlery, plates, and anything else you might need to chow down where you bed down.

During the pandemic, the hotel room is king. Other than the inside of your car, it's just about the only place along your journey where you can exercise some control. You must outfit it as desired.