Thank you for subscribing!
Got it! Thank you!
Home›Trip Ideas›Local Experiences›How Travelers Can Join the Bicycling Boom in Paris 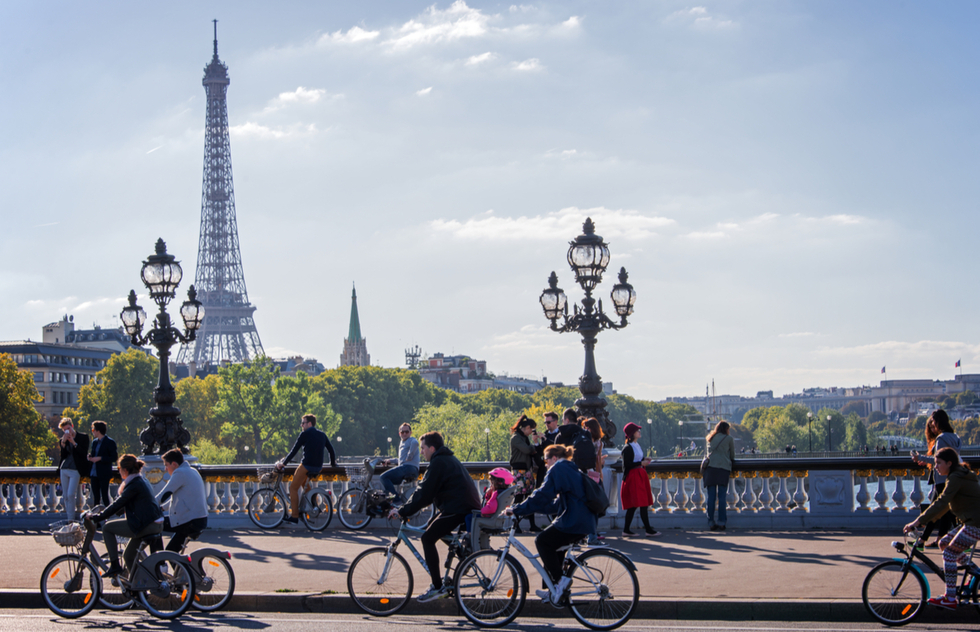 How Travelers Can Join the Bicycling Boom in Paris

The French capital has gotten très pedal-friendly. Here’s how to rent a ride and explore the city on two wheels.

One of the very few upsides of the pandemic is that cycling has become intensely popular pretty much all over the globe, including in Paris.

Almost a year and a half after the first lockdown, all it takes is a quick walk around the city center to see that Parisians have gone gaga for bikes. Classic bikes, electric bikes, three wheelers with kid carriers—les vélos are all over the place.

What does this mean for bike-happy travelers? For one thing, it means the city’s cycling infrastructure, which had already improved drastically over the last couple of decades, has gotten even better, with a wealth of new bike paths, equipment, and possibilities ready and waiting when you arrive.

The city has evolved since the famous Vélib’ bike-sharing program was launched in 2007. Back then, you needed a steady set of nerves and a blatant disregard for personal safety to cope with the crazy traffic and narrow streets—without a bike lane in sight.

While Paris is still not Amsterdam—where cyclists reign supreme—changes in the French capital are striking. Numerous protected bike lanes on major roadways make it a true pleasure to pedal through the city, and the bike-sharing program is much improved, too.

Gone are the heavy bikes and persnickety docking stations that were once the norm with Vélib’. Today’s rentable bikes are lighter and easier to handle, and a simple code or pass will unlock them from their stands.

There are regular (green) and electric (blue) versions. Sign up online via the website or download the free smartphone app; you will receive a code that will allow you to use up to five bikes at a time. 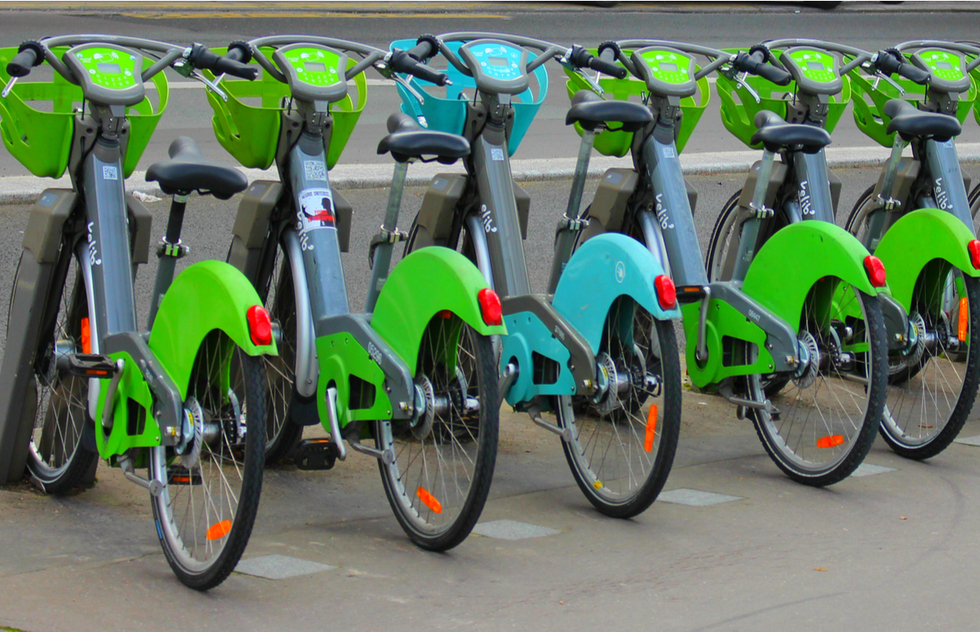 Subscriptions are still ridiculously cheap: €5 for a one-day pass, €15 for 7 days. For a classic bike, that means as many half-hour rides as you like. If you want to ride longer, it’s €1 for each additional 30 minutes.

Electric bicycles are a little bit more: €1 for the first half hour and €2 for every additional 30 minutes.

The Vélib’ app will help you locate stands and get to where you want to go. This is crucial, as docking stations are not always where you think they should be, and riding through Paris can still be frustrating if you are not familiar with your route—one minute you're on a delightful, protected bike lane with views of the Eiffel Tower, the next you decide to check out Place du Trocadéro and are obliged to take a long and bumpy detour along a cobblestoned street. 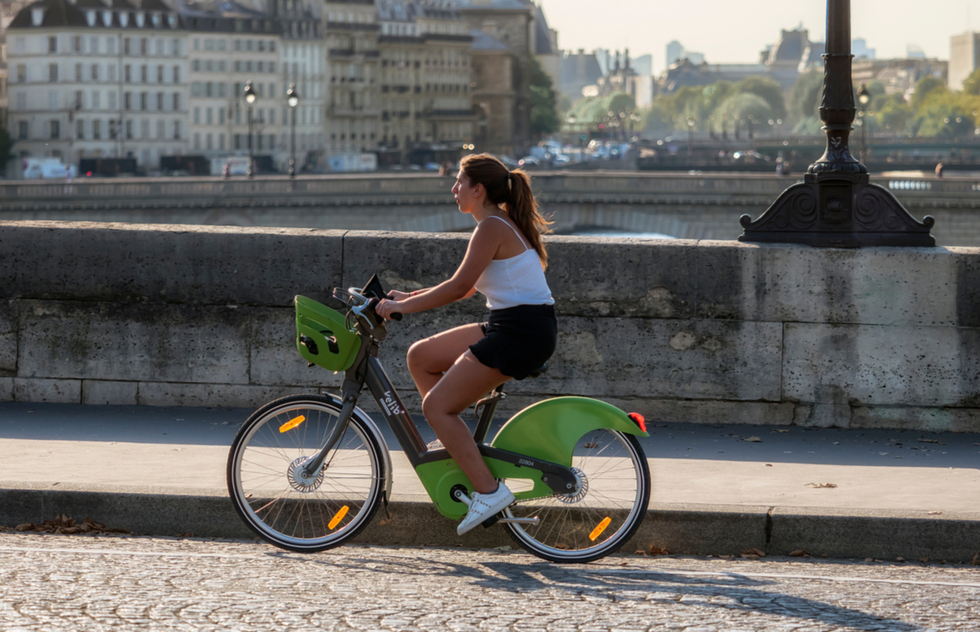 You can now get from the Arc de Triomphe to the Place de la Bastille, a distance of nearly 6.5km (4 miles), without ever leaving a bike lane. Start your journey by riding down the Champs-Élysées, which has a protected—if narrow—bike lane on either side of the boulevard. Take a deep breath and brave the less-protected stretch around the Place de la Concorde or take the separated bike lane in the car tunnel that goes under the plaza.

Then you’ll reach urban cycling nirvana: the rue de Rivoli. This once traffic-clogged avenue has been transformed into a giant bike path, with just one skinny lane left for taxis and buses and the occasional ill-informed driver. Should you feel the urge, you could pedal straight past the Hôtel de Ville and the Place de la Bastille all the way to the Bois de Vincennes, the large park on the eastern edge of the city. 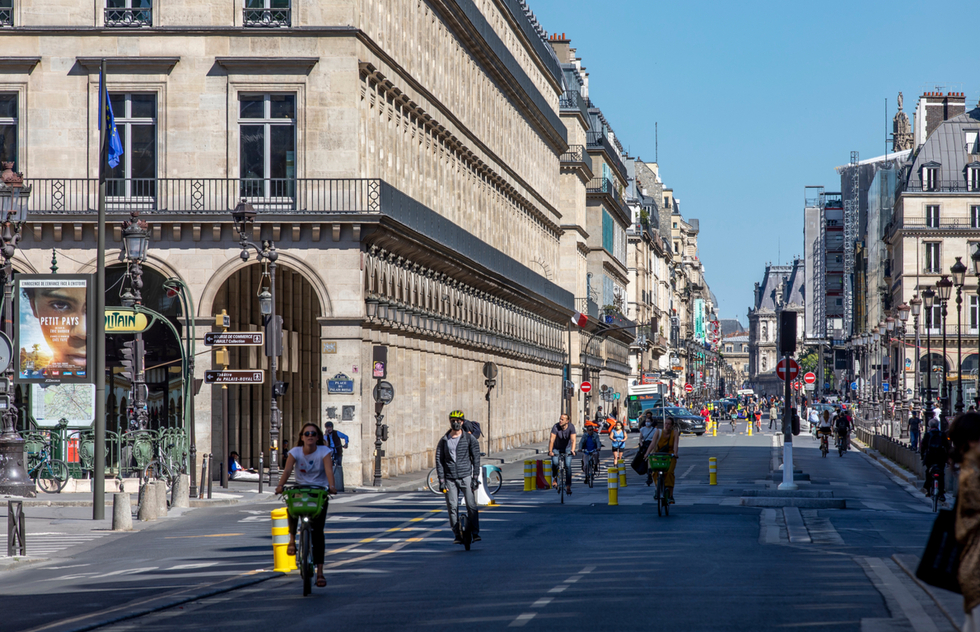 On the Left Bank, a spacious, protected bike lane follows the Seine, allowing you to take in the same iconic sights (the Eiffel Tower, Notre-Dame Cathedral, and the Louvre chief among them) you would see on the Bateaux Mouches boat rides. On two wheels, though, you don’t have to listen to droning recorded commentary and strangers are less likely to spill soda on your shoes.

For a south-north trip, follow Boulevard Saint-Michel past the Jardin du Luxembourg and the Sorbonne to the Île de la Cité, with a quick detour around the wounded but recovering Notre-Dame. Continue north through the Place du Châtelet, up Boulevard Sébastopol, past the Centre Pompidou to rue de Turbigo, which will take you to Place de la République and, finally, the Canal Saint-Martin.

There are many other routes to be discovered on the Vélib’ website, which also provides themed itineraries on the 1871 Paris Commune, singer Edith Piaf, and other subjects.

Another option for mapping routes using your smartphone is Geovelo. This GPS-enabled mobile app offers all sorts of cycling info and themed itineraries for not only Paris but all of France. A paper map, “Paris à Vélo: Le Bon Plan,” is available at tourist offices and bike shops.

If you don’t want to be tethered to Vélib’ docking stations, you can try “le free-floating.” There aren’t many companies offering this leave-your-bike-anywhere type of service anymore, mostly because people did just that and the city got mad and imposed restrictions.

Free-floating companies tend to come and go, but Lime, which offers electric scooters as well as electric bikes, seems to have staying power. The downside is pricing. There is no fixed rate for rentals; consult the app for the price of your trip. Overall, you’ll find that Lime is more expensive than Vélib’.

Another alternative is to rent a bike for the day or the week from a bike shop such as Paris à Vélo (22 Rue Alphonse Baudin; rentals from €16 per day) or Holland Bikes (with pickup locations near the Arc de Triomphe, Notre-Dame, and the Opéra; rentals from €17 per day).

Opting for a rental company is a good move if you’re traveling with young children. Vélib’ bikes come in one size and the program is recommended for the 14-and-over set.

Bike shops will also let you rent helmets—essential for your own safety and legally required for children ages 12 and under. If you want to bring a helmet from home, folding models will take up less space in your suitcase. (Fend's collapsible helmet got high marks in our 2020 holiday gift guide.)

Once you’ve secured the necessary equipment and mapped a route, get out there and get pedaling. You’ll discover a different Paris—one that is more accessible, more ecological, and a lot of fun.