Thank you for subscribing!
Got it! Thank you!
Home›Trip Ideas›Family & Kids›Teen Artist's Incredible Chalk Drawings Will Take You Around the World 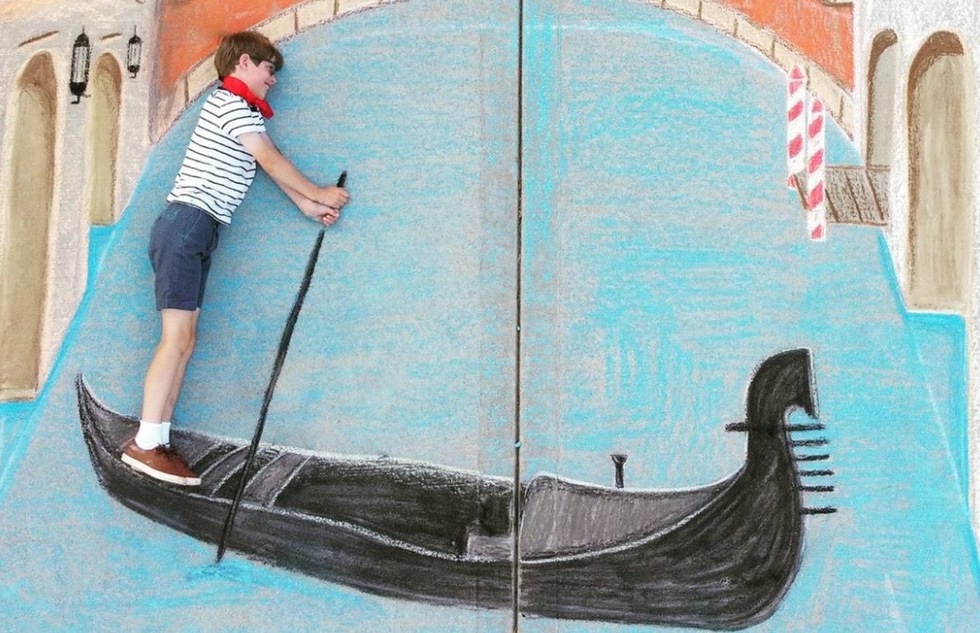 Teen Artist's Incredible Chalk Drawings Will Take You Around the World

An Illinois teenager and her younger brother create delightful chalk art scenes of tourist landmarks across the globe.

While most of us have been cooped up at home since March, 9-year-old Camden Everett of Libertyville, Illinois, has been to the Great Wall of China, the Grand Canal in Venice (pictured above), the Statue of Liberty in New York City, and even outer space.

His mode of travel will be familiar to anyone who’s seen Mary Poppins: He goes by pavement chalk drawing.

The globetrotting artwork is created by Camden’s 14-year-old sister, Macaire, a chalk virtuosa who uses her family’s driveway as a canvas for elaborate backdrops and her supine sibling for playful and clever trompe l’oeil effects. 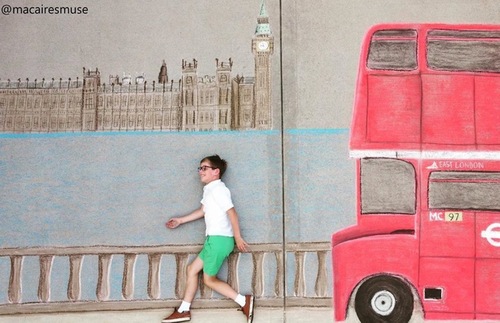 The vignettes are then photographed from overhead and posted to Instagram, supplying followers with a near-daily reminder that travel can be as much about imagination as about crossing time zones.

Frommer’s caught up with the siblings’ mother, Christine, via email. She passed her laptop to the artist to answer a few of our questions about how she came up with the idea, how scenes are created, and where in the world Camden will be going next.

FROMMER'S: Are you and your family big travelers?

MACAIRE EVERETT: Some of our favorite trips are hiking in the mountains in Colorado, going to the beach in Amelia Island, Florida, and visiting Acadia National Park in Maine. There are many more places we want to travel in the U.S. and we also want to travel to different countries. We have close friends who live in Ireland and planned to visit this year but can't right now.

How’d you get the idea for the chalk drawings project?

EVERETT: During the week we were supposed to be on spring break in Florida, we were home. My brother and I were pretty sad and bored. One day we were outside and while he was riding his bike, I took out some chalk and drew some balloons. I asked Cam to lay down on the driveway and pretend he was holding them. He ran in the house to get his stuffed bunny, Hopper, and then I took the picture. The rain washed the picture away, but I decided to draw Cam golfing the next day, since he was sad about missing his golf lessons. I first set a goal to chalk every day until we went back to school. When they announced we weren't going back, I set a goal to chalk 100 days in a row. [She has since passed that goal, and continues to create new posts.]

We are all getting through this together Today’s art was inspired by a picture I drew of my brother and I when I was about his age. #sidewalkchalk #sidewalkchalkart #sidewalkart #crayola #crayolachalk @crayola #sayitcolorfully #chalkyourwalk #covidchalkchallenge @theellenshow @jimmyfallon #somegoodnews @somegoodnews #chalkrainbow #rainbow

What goes into making each drawing? And how are the photographs taken for Instagram?

EVERETT: During the first 100 days of chalk art, our family talked about ideas at dinner each night, and then I decided what I felt like drawing that day. Cam and I decide what he's going to do in the picture before I start, to try to make it interesting and unique. Now we are getting a lot of ideas from people on Instagram, who are asking Camden to visit their country. I pick a country based on suggestions and look online to find a fun adventure he can take there. My dad takes the pictures using a drone that has a camera. He also power-washes the driveway. My mom makes sure I have enough chalk.

What are your favorite pictures?

Some of my favorite pictures are the Bean [aka Cloud Gate] in Chicago, Lake Louise in Canada, and Carrick-a-Rede rope bridge in Ireland. Camden liked when he was climbing Mount Everest, jumping rope with kangaroos in Australia, and golfing in St. Andrews [Scotland]. He wants to golf there someday.

What are some places we can expect to see in future drawings?

EVERETT: Cam will be traveling to Japan and Argentina soon. We love when people comment on Instagram and invite Cam to come to their country.

More than 115 of Macaire Everett's chalk artworks have been gathered in a new book, The World from Our Driveway. To see her latest drawings—and find out where Camden's next adventure will take him—follow @macairesmuse on Instagram.