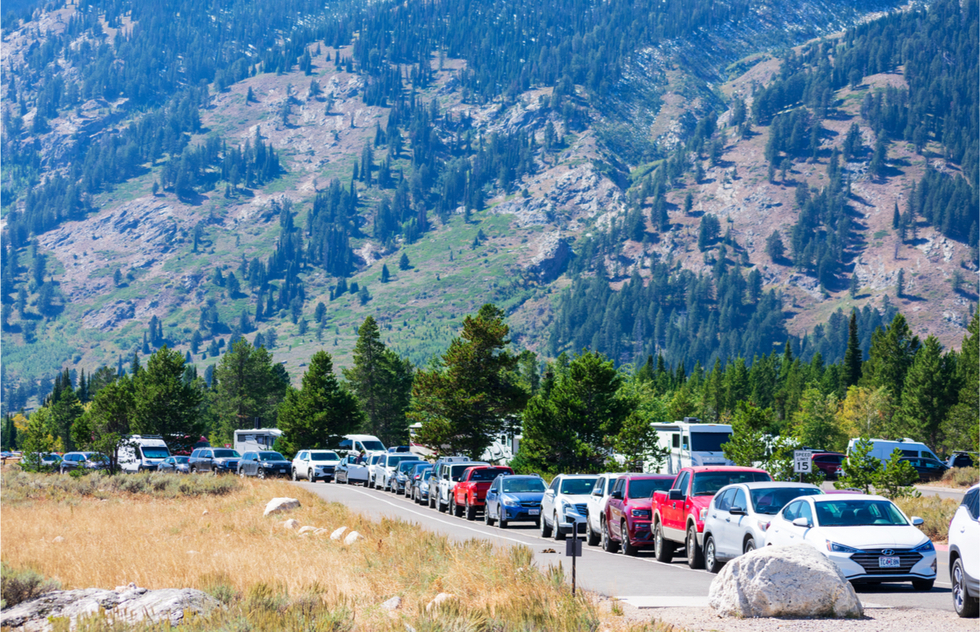 How to Survive the USA's Crazy-Busy National Parks This Summer

America is entering a summer of pent-up travel energy following more than a year of homebound life. And as long as most international countries remain unready to fling open their doors (not without putting up obstacles anyway), U.S. vacationers are directing their plans toward domestic destinations.

If you thought 2021 would be the summer you finally knock the great national parks off your bucket list, we hate to break it to you, but everyone had the same idea at the same time.

All the data projects skyrocketing attendance this year—all while staffing levels are down, many facilities remain shuttered out of coronavirus caution, and some areas are closed for safety or maintenance reasons that have nothing to do with Covid-19.

So before you pack up the car only to find yourself in traffic on some rural scenic road, take stock. Here are some things you can do to ensure your national park holiday isn't a bumper-to-bumper bust.

Yellowstone National Park, which is mostly in Wyoming, just logged its busiest May in history. Arches National Park in Utah has to close its gates nearly every morning well before 9am to wait for traffic to subside.

A volunteer for Yosemite in California told the Daily Mail, "People think they're getting nature and beautiful trails and instead they're inhaling car exhaust for hours and finding trails and facilities overcrowded."

What do all these places have in common? They're among the marquee national parks that everyone knows. And if everyone knows about them, those parks are the most likely to be visited.

If you hate lines of cars, this is the year to select an overlooked national park (here's a list of 12 of our favorites), such as Black Canyon of the Gunnison in Colorado, Great Basin in Nevada, or the Indiana Dunes, recently designated in 2019.

There are 423 national park units in the U.S., encompassing some 84 million acres. Let's not all pack ourselves into the same few.

Do not assume that if you get to the gates by dawn you'll get to see all the things you want to see. In 2021, the early bird got the worm three months ago when bookings opened.

Yosemite in California, Rocky Mountain in Colorado, and Glacier in Montana have all resorted to requiring reservations for entry to some or all of their lands.

Even parks that don't have reputations for crowds, like Acadia in Maine, have instituted reservation systems for their most popular scenic drives, trails, and parking lots.

This year, it's absolutely non-negotiable that you consult the official park page of the unit you intend to visit to read up on the planning demands for the particular elements you want to experience. You can start at NPS.gov.

There's no excuse for rolling up to a national park without having found out the ground rules first, because over the winter the National Park Service released a truly comprehensive and easy-to-use free smartphone app that can answer 99% of your planning questions. You'll find a description of that and links for downloading the app right here.

Most large national parks have multiple entrances, and in many cases, the bulk of visitors will cluster in one area. Head away from those tourist hubs and you can often hike with barely a soul in sight.

Yellowstone still has areas that are 20 miles from the nearest road, and those reaches are some of the most secluded spots in the country.

That's a great option for people who love to hike and camp, but you don't always need backcountry skills. You can drive right into Hetch Hetchy, the least-used entry gate to Yosemite. Because its road doesn't connect to the overcrowded Yosemite Valley, Hetch Hetchy is the only place in that park where visitors can get a day pass without a reservation.

Just make sure the uncrowded area you choose will be open—some parks are still crawling out of their pandemic hibernations and may not have staffed those entry posts yet.

Have a booking at a lodge.

Good luck there! Capacity is still being constrained and, besides, bookings filled up months ago. But if you should be lucky enough to snag a cancellation, having a confirmed reservation is often a ticket past the ranger gates and you won't need a general park reservation.

Even having a lodge reservation doesn't solve everything, though. You still may have to compete for parking with general visitors or even take a park shuttle, with all your luggage, from satellite lots.

At places like El Tovar Dining Room at the Grand Canyon, there aren't enough slots at dinner to handle all the people, so reservations are snapped up within minutes of becoming available a month in advance. At other national parks such as Glacier, tourists are waiting for hours at the few concessions that are open because there's nowhere else to go. Food quality is at an all-time low.

Our advice: Bring food with you in case the concessions are full or still closed.

Having a recreational vehicle solves the problem of where to sleep—as long as you can find a place to park legally.

As with park entry and hotel rooms, reservations for RV spots go quickly. You could really use our guide to finding campsites and hookups.

Getting an RV will be tough this year, too, because once again, everyone has had the same idea at the same time. But we have you covered there with our First-Timer's Guide to Renting an RV.

Clean up after yourself.

The world can be fairly demoralizing right now, but few things are more depressing than someone who thinks nothing of tossing used water bottles, propane tanks, and wrappers in the middle of a nature reserve.

National parks are not like Six Flags. There's not an army of workers combing the grounds every night for trash to make everything spotless for the morning crowds. (Come to think of it, Six Flags barely does that, either.)

Popular trails are littered with trash, adding to the 70 million pounds of waste the parks already have to contend with each year.

Even though attendance is up and the list of deferred maintenance grows, Congress has not increased the national parks budget to a commensurate degree. With staff and volunteers overstretched, there are few people available to hike thousands of miles of trails to pick up after selfish slobs. We are not taking proper care of our national parks on either a political or a personal level.

Rangers are encouraging visitors to take all refuse and food scraps away with them. Human edibles attract wildlife, and the more animals become accustomed to being near humans and relying on them for meals, the more sick or dangerous those animals can become.

Leaving no traces behind is more than an issue of good manners or tidiness. This month, someone who camped illegally between Aches and Canyonlands national parks in Utah left a fire unattended. The resulting Pack Creek Fire has now engulfed nearly 9,000 acres and cost almost $3 million to fight.