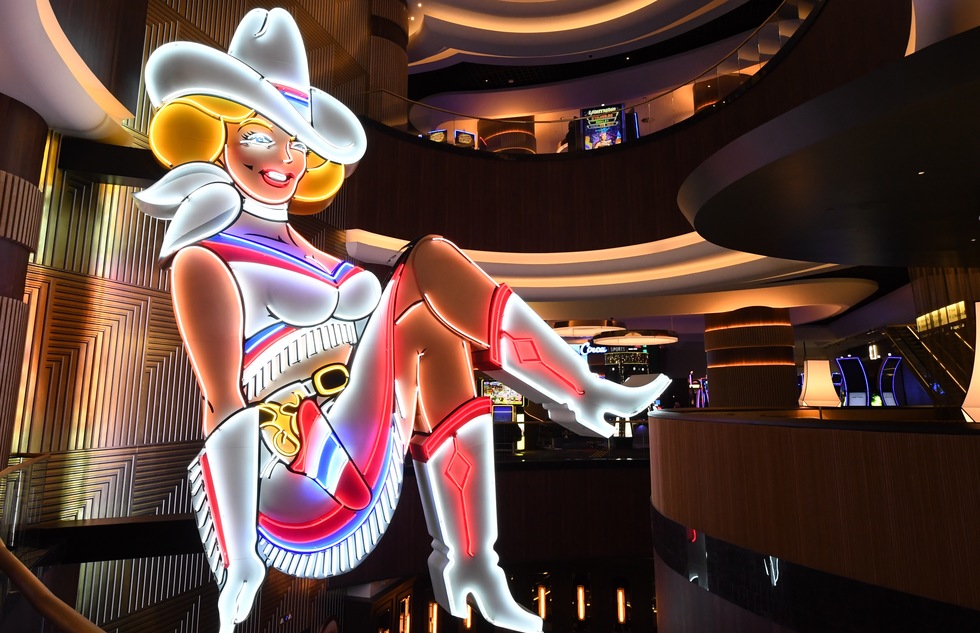 Circa Resort & Casino, which opened this week on Fremont Street in downtown Las Vegas, is the city's first casino built from the ground up in four decades.

But not everything on site is brand new. In a nod—or, in this case, kick—to the property's past, Vegas Vickie, the 25-foot-tall neon cowgirl once stationed above the Girls of Glitter Gulch strip club, has been installed in Circa's hotel lobby. And yes, the blonde icon's extended leg, thrown over the knee of the other, still kicks.

Unveiled in 1980, Vickie was taken down from her original perch in 2017, when Glitter Gulch and other Fremont mainstays, including Mermaids Casino and the Las Vegas Club, were demolished to make way for Circa.

The sign received a thorough glow-up from the neon wizards at Yesco, according to the Reno Gazette-Journal. Dents were smoothed over, a fresh coat of paint was applied, lights were adjusted for indoors, and a new leg motor was put in. You know: the sort of work any aging star would have done.

An adjacent cocktail lounge at Circa is named in Vickie's honor. Perhaps the idea is that she'll drink her troubles away after being separated from her spouse, Vegas Vic, who remains out on Fremont Street. The giant neon pair were "married" in 1994 to celebrate the creation of the Fremont Street Experience, which gathers many classic Vegas casinos in a pedestrian-only zone under a lighted canopy. 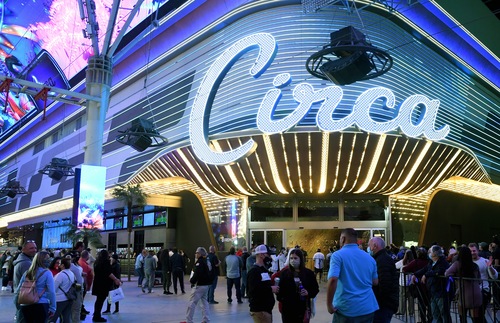 Among the other offerings at the adults-only Circa are a two-story gaming floor, numerous food and drink venues, and the world's largest sports book, where a 78-million-pixel screen is capable of showing up to 19 games at once. 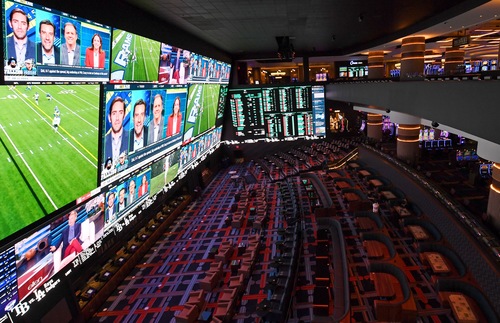 (Sports book at Circa Resort & Casino)

Big screens are evidently something of a Circa specialty—there's a huge, 143-foot-wide one at the outdoor Stadium Swim area. Six terraced swimming pools face that LED expanse, amphitheater-style. 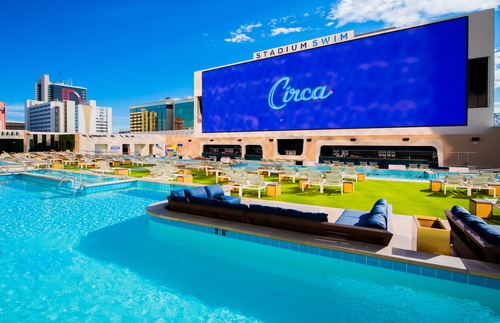 Circa's 777-room hotel tower is still in the works. It's scheduled to open December 28.

It's hoped that the new casino resort's arrival will help improve the luck of the tourism industry in Vegas.

The city reopened to visitors in June after closing due to the pandemic, but in large part because of crippled convention trade, incoming arrivals are way down—by 51% in September compared with 2019.

With hotels having to reduce capacity, there have been mass layoffs, amounting to 18,000 lost jobs at MGM Resorts alone. There's also talk of Las Vegas Sands looking to sell its properties, which include the Venetian and Palazzo resorts (where the current season of ABC's Shark Tank was hosted to help shore up receipts).