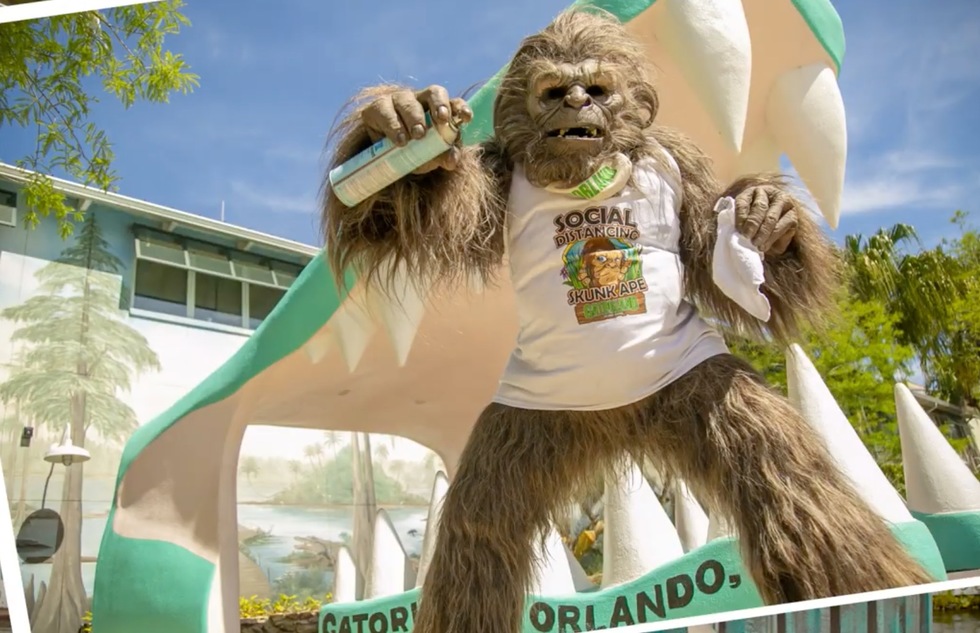 Orlando's Gatorland, a wildlife park and venerable locus of Florida kitsch, reopened to visitors on May 23, getting the jump on the region's larger, younger, slicker family-friendly attractions such as Universal Orlando Resort (set to reopen June 5) and Walt Disney World (July 11).

And here's something else Gatorland has that its rivals lack: the Social Distancing Skunk Ape, a woolly health-and-hygiene mascot resembling an unholy Bigfoot-Chewbacca hybrid.

The shaggy critter was already familiar to Gatorland fans from promotional material and in-park appearances (spare a thought for this and every Orlando worker required to wear a heavy costume in the baking heat of a Central Florida summer).

But now the Skunk Ape has been rebranded to encourage Gatorland visitors to stay at least 6 feet apart from one another, wash their hands frequently, and make use of newly installed sanitizer stations throughout the park.

Gatorland introduced the made-over mascot in a 3-minute video that is on-brand bonkers.

Apparently unable to decide on a single rhyming tagline for the safety-minded Skunk Ape, the clip uses three: "It's always wise to sanitize!" "He won't be mean if your hands are clean!" And our favorite: "Man, he's insistent that you stay distant!"

Otherwise, the safety measures Gatorland has adopted since reopening are similar to rules being introduced at other parks around the world: spaced-out queues for attractions (there aren't many lines at Gatorland anyway), some temporarily closed water play areas and shows (including the Jumparoo Show, in which reptiles leap for chicken carcasses), and "reduced capacities and seats" at food venues, animal demonstrations, and the few rides, which include a zip line over gator ponds and the park's newest attraction, an off-road monster-truck safari.

Additionally, park employees will be wearing masks and disinfecting contact surfaces after each use.

Since Gatorland is never as packed as the big amusement parks in the Orlando area, your chances of maintaining personal space are better here.

We're hoping you don't need a reminder to keep your distance from the many resident alligators. Their response won't be anywhere near as friendly as the Skunk Ape's.

For a thorough rundown of Gatorland and all the other nearby attractions, consult Frommer's full guide to Orlando, available in print or downloadable e-book.