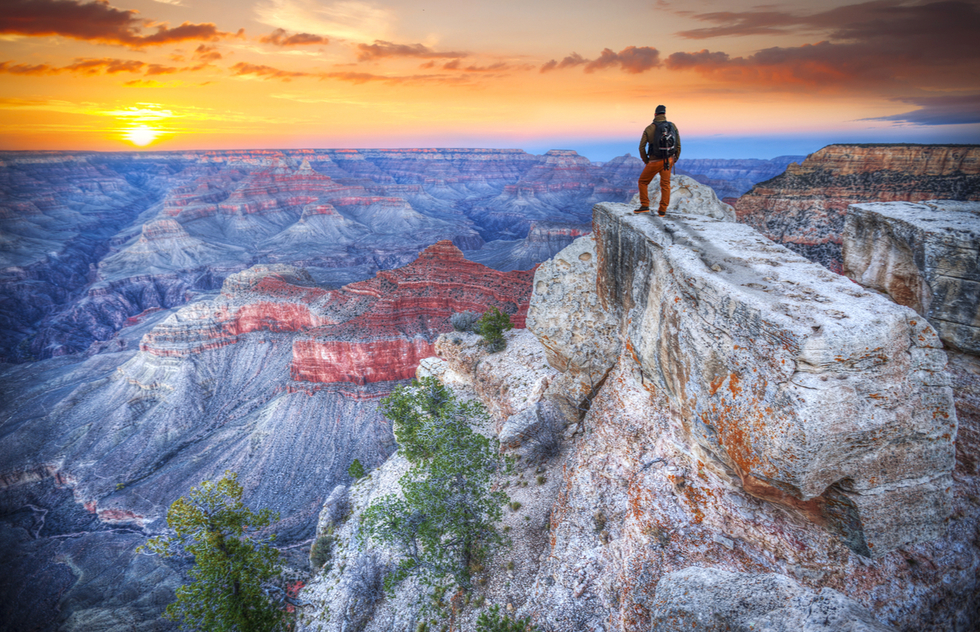 During the pandemic, U.S. national parks have been a haven for cooped-up Americans who are starved for wide open spaces.

And while we'd never want to spoil anybody's haven, it's important for visitors to remember that although expanses of wilderness can be majestic, they can also be hazardous, what with all the great heights, extreme temps, churning rivers, wild animals, and other vacation-ending (or, heaven forbid, life-ending) tools at Mother Nature's disposal.

Using data obtained from the National Park Service (NPS) via a Freedom of Information request, the outdoor experts at Outforia have compiled a list of U.S. national parks where the most deaths have taken place since 2010.

At the top of this gloomy ranking: Arizona's Grand Canyon (134 deaths), followed by California's Yosemite (126) and the Great Smoky Mountains (92) of North Carolina and Tennessee.

The leading danger, according to the research, is falling—though that's not the way most people die at the Grand Canyon, despite the site being, as a one-star reviewer memorably pointed out on Yelp, "a hole. A very, very large hole."

Instead, Outforia found that the leading cause of death at the Grand Canyon is "medical/natural" causes—the second most common category overall. Hikers unprepared for Arizona's blistering summer heat surely contributed to those grim figures.

Determining how dangerous a park is doesn't just depend on the number of fatalities, however—it's to be expected, after all, that the parks that get the most visitors will have more deaths than less popular sites.

And, sure enough, the three parks that top Outforia's list—the Grand Canyon, Yosemite, and the Great Smoky Mountains—are second, fifth, and first, respectively, on the NPS's list of most-visited national parks in 2019, the most recent year for which data is available.

Those number crunchers took the sum of deaths at each national park and recreational area between 2007 and 2018, and adjusted the figures according to visitation data to find the number of deaths per 10 million visits.

Instead of showing the parks with the most deaths, the results purport to tell you the park where you're most likely to die.

And by that measure, the report named North Cascades National Park in Washington State the country's deadliest.

Though the park gets only around 30,000 annual visits, the report states, it had a "death rate of 652 per 10 million visits—6.5 times higher than [runner-up] Denali National Park & Preserve and nearly 22 times higher than the average." 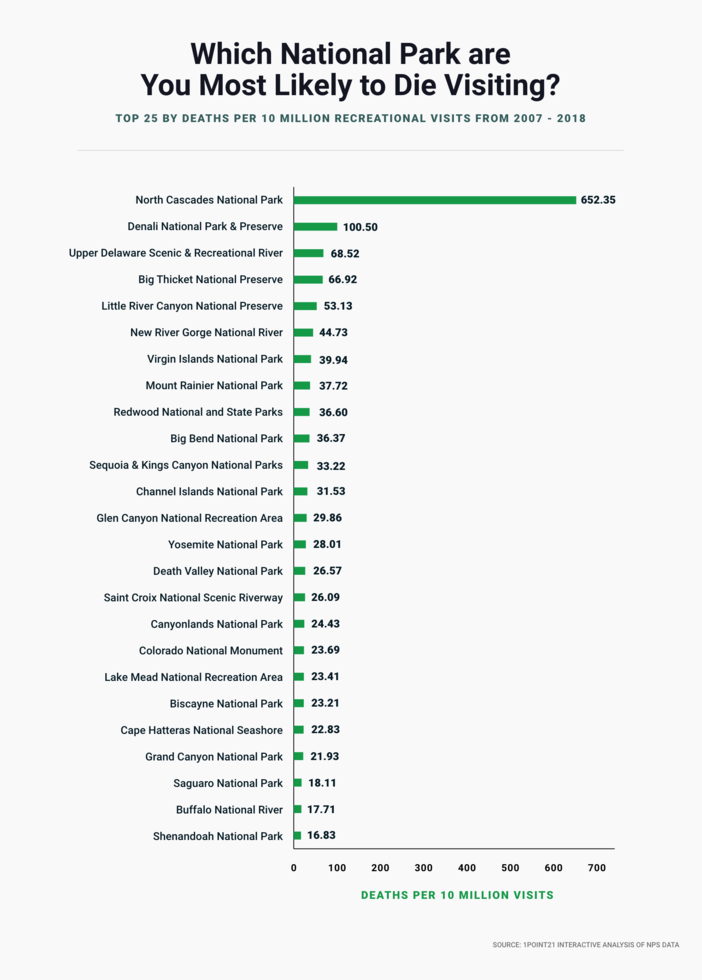 North Cascades is "made up of rugged and steep mountain and glacial terrain with very few roads or structures,” one of the study's main authors, Brian Beltz, explained to Forbes. “As most of the deaths there involved falls or environmental incidents, I would imagine that this plays a big role.”

As for the Grand Canyon, it moved down to 22nd place when Beltz and company adjusted for visits. The Smokies (45) and Yosemite (14) also moved out of the top 10.

One heartening fact amid all this misery: Overall, Beltz told Forbes the data show that visiting U.S. national parks is ultimately pretty safe. "I mean, eight deaths per ten million visits is a very, very low rate,” he said.

Still, tourists venturing into these areas should be prepared, follow park rules, stay out of restricted areas, and keep their distance from wildlife.

And, we're begging you, don't take risks to snap dramatic photos—an increasing problem we should all avoid because who wants the word "selfie" in their obituary? (The glut of cameras in the parks could soon get even worse, by the way, now that a federal judge has ruled that commercial filmmakers shouldn't have to acquire special permits to shoot on public lands.)

Escaping your coronavirus cloister to cavort in the great outdoors sounds like an excellent idea. But please cavort responsibly.