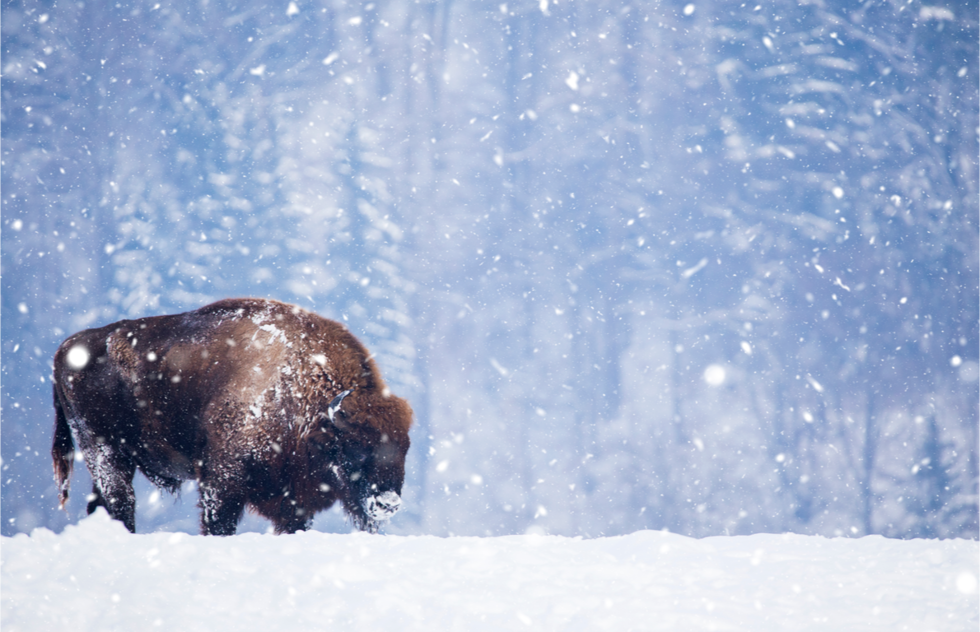 The Best U.S. National Parks to Visit in Winter

Winter doesn't have to mean hibernation for nature lovers. In fact, at certain U.S. national parks, winter is the season when a visit is most rewarding, either because crowds diminish or travel-worthy natural phenomena only occur during certain months. Here, in no particular order, are our top choices for national park getaways in December, January, and February.

Pictured above: a bison in a snowstorm at Yellowstone National Park 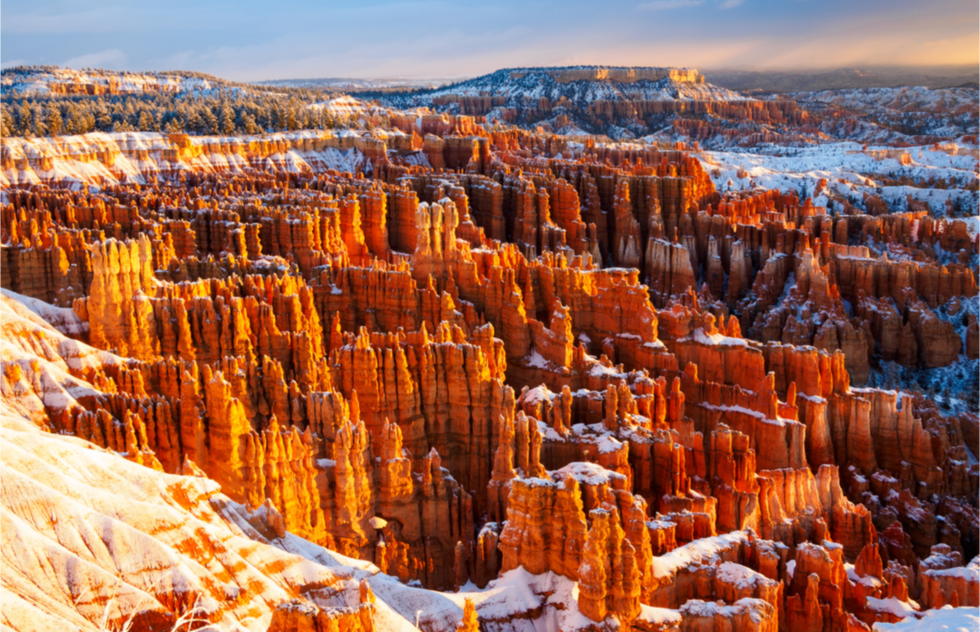 Talk about a winter wonderland. This misnamed park—it's actually not a canyon, but a series of natural amphitheaters—manages to become even more beautifully otherworldly when a dusting of snow accents the natural red rock spires known as hoodoos.

The park stays active with snowshoeing programs led by rangers. There are also excellent opportunities to go cross-country skiing on trails along the rim of the canyon—er, natural amphiteater—and in the adjacent Dixie National Forest.

The famed hoodoos were formed 40 million years ago from soft sandstone and shale deposits and then carved over the eons by wind, rain, ice, and the uplifting of the Colorado plateau. The park also has alpine meadows and coniferous forests to explore. Zion National Park is less than 40 miles away, so a vacation twofer is fairly easy to plan. To tell you the truth, Utah's fantastical landscape is worth exploring any month of the year. 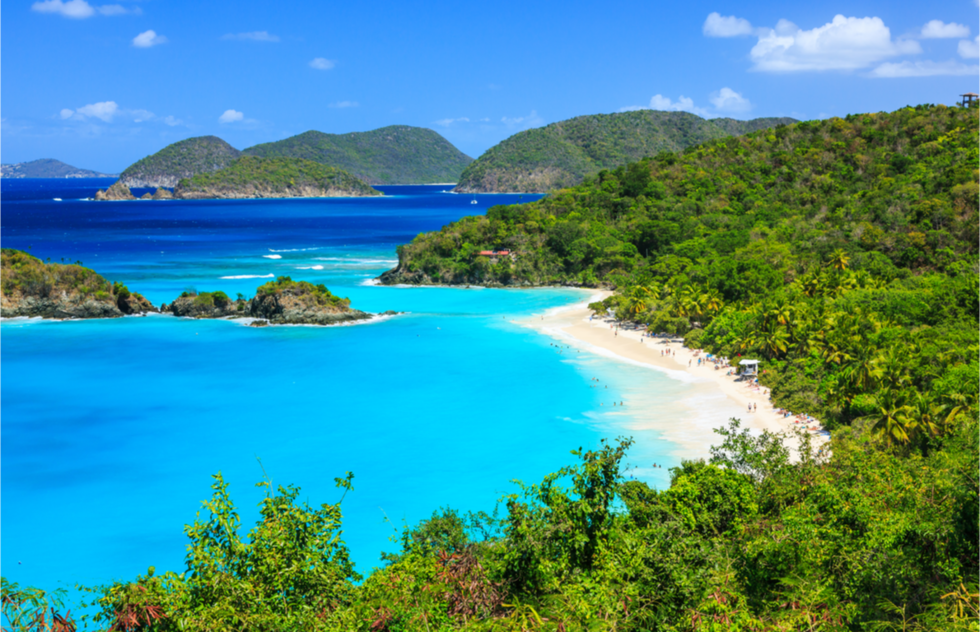 Winter getaways don't have to involve snow, of course. This time of year is the dry season in the U.S. Virgin Islands, treating visitors to days of unbroken sunshine (and no hurricane threat).

The island of St. John is almost entirely national parkland, and because it has no cruise ship pier, the isle is far more serene than other spots in the region. Visitors can follow a dedicated snorkeling trail in Trunk Bay (pictured above), take ranger-led hikes through pristine forests, and see cultural demonstrations and history exhibits at former sugar plantations. Prefer to take it easy? St. John is said to have the Virgin Islands' most white sand beaches per capita. 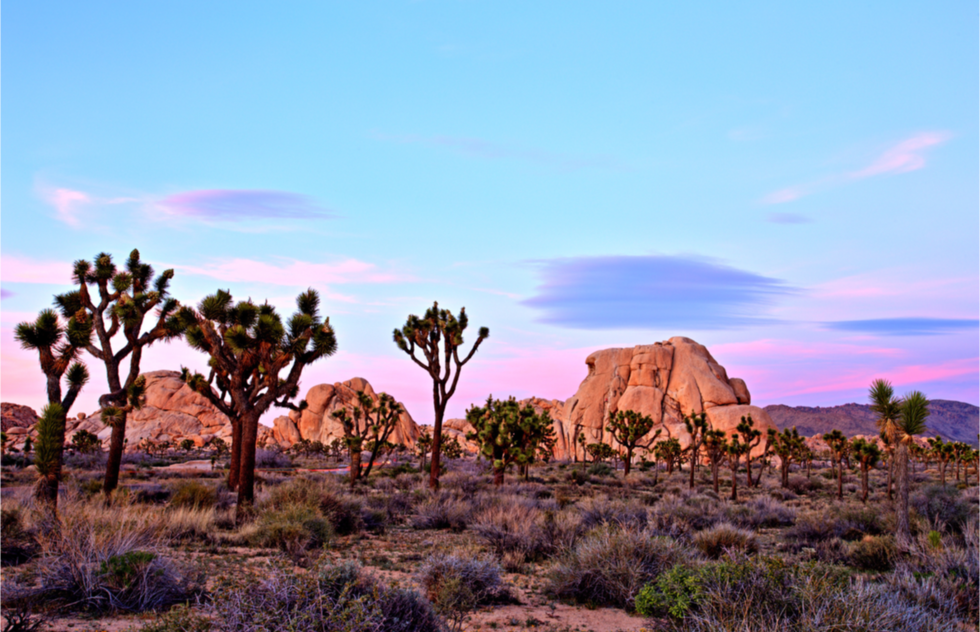 A paradise for rock climbers, Joshua Tree also has excellent cycling, hiking, and horseback riding. And a temperate daytime climate lets folks do all that in winter without risking heatstroke (pack layers, though—temps drop significantly at night).

The park's namesake Yucca—not quite a tree, actually—can grow up to 40 feet in height and live up to 150 years. Those outstretched arms probably have a lot to do with the plants' appeal to we humans. Becauase the park straddles the Mojave and Colorado deserts, there are a lot of different landscapes to explore. 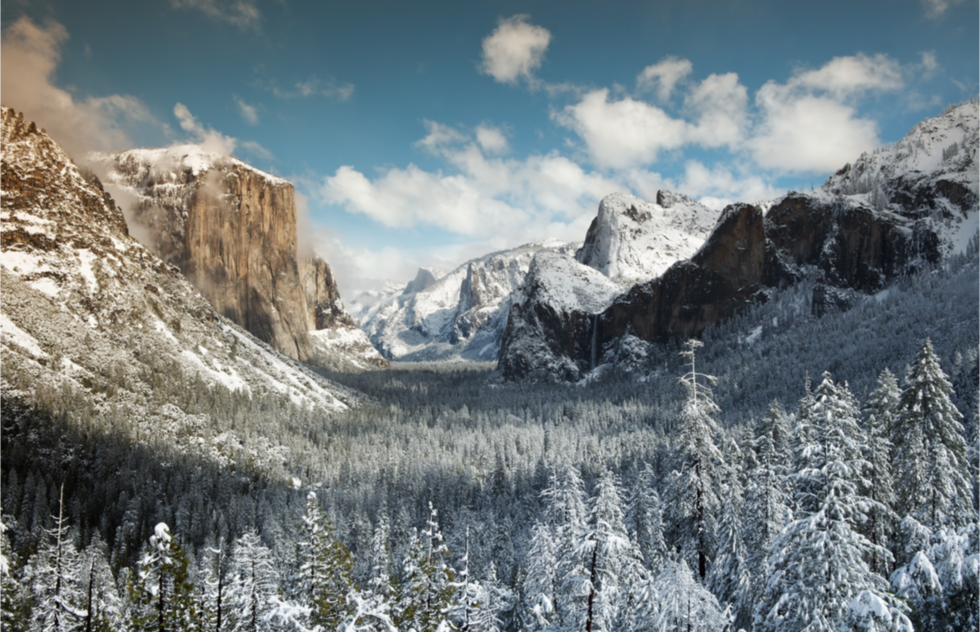 Yosemite is the only U.S. national park that has ever bid to host the Winter Olympics. Though Lake Placid, New York, ended up winning the 1980 games, that doesn't diminish Yosemite's standing as a hub for skiing, snowboarding, ice skating, snowshoeing, and other cold weather sports.

Those with more tranquil tastes can take in majestic sights such as a partially frozen waterfall, the mighty Half Dome monolith shrouded in white, and bighorn sheep or red foxes tramping through snow.

And speaking of snow, make sure your car has snow tires and chains before you attempt to drive into Yosemite. Located in the Sierra Nevada mountains, the park gets colder and snowier than parts of California that are just a couple hours' drive away. As I learned the hard way, you're gonna wanna be prepared. 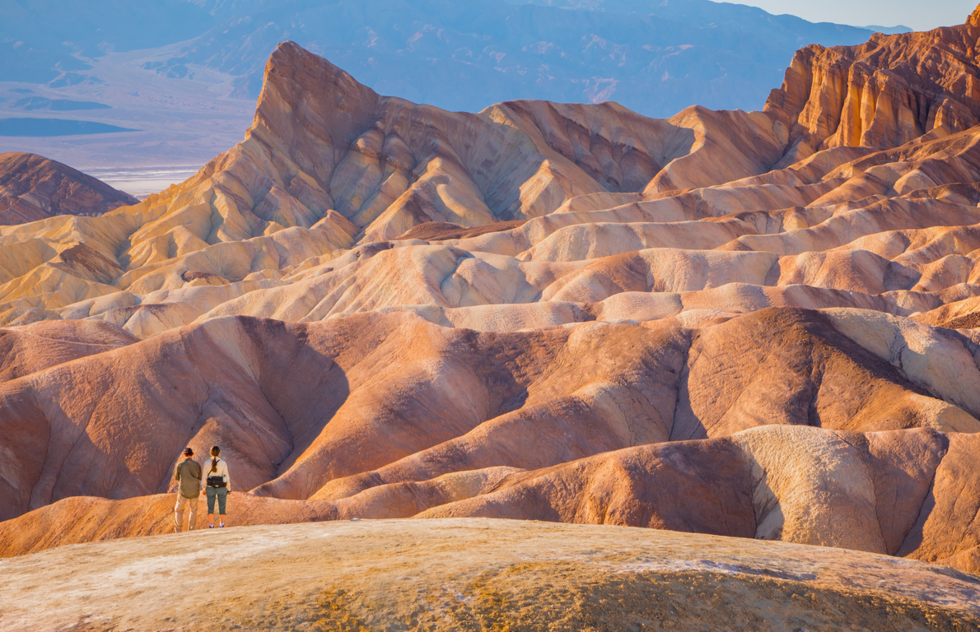 One last California pick. Death Valley is a place like no other and holds the records to prove it. It is the lowest point in the country, the largest park in the contiguous United States, and the hottest place on earth, having once recorded a thermometer-busting reading of 134° Fahrenheit, according to Guinness World Records.

Do you get why we're sending you here in winter? That's the best time to enjoy in relative comfort the park's desert panoramas and spectacular stargazing. 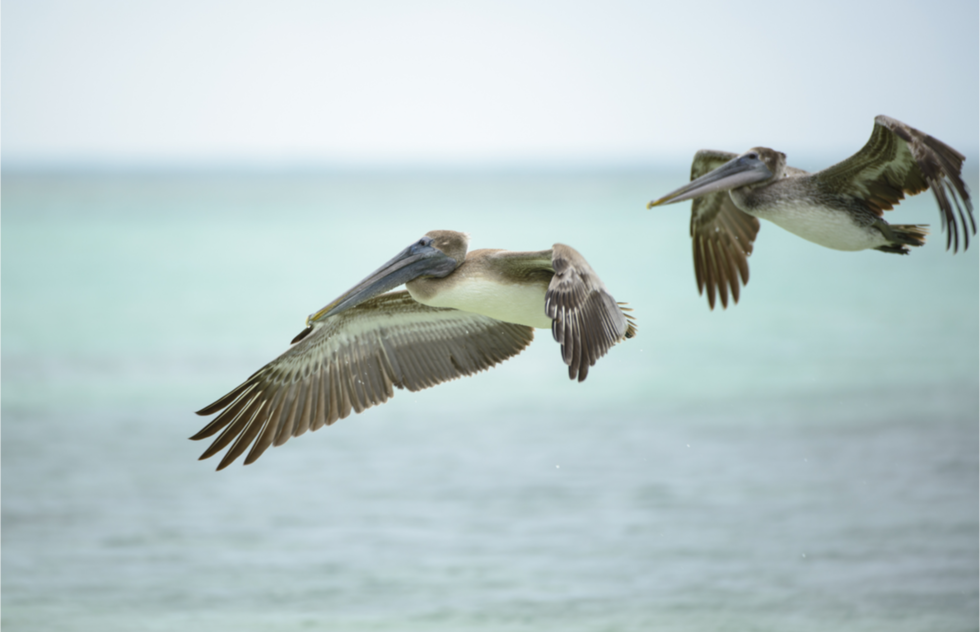 Only 1% of this tropical park west of the Florida Keys lies above sea level. To see the rest, you'll need a swimsuit and some fins for snorkeling or diving.

Accessed via ferry, the remote park sits in the Straits of Florida, an aqua blue stretch between Miami and Havana that's known for its coral reefs and schools of brightly colored fish. Fort Jefferson, an imposing brick structure that served as a military prison during the Civil War, is now a rookery for sooty terns in winter.

Since the seabirds don't nest anywhere else in the continental U.S., Dry Tortugas is considered a must-visit by many bird watchers, who also feast their eyes on around 300 other avian species (such as pelicans, pictured above) that pass through the park every year. 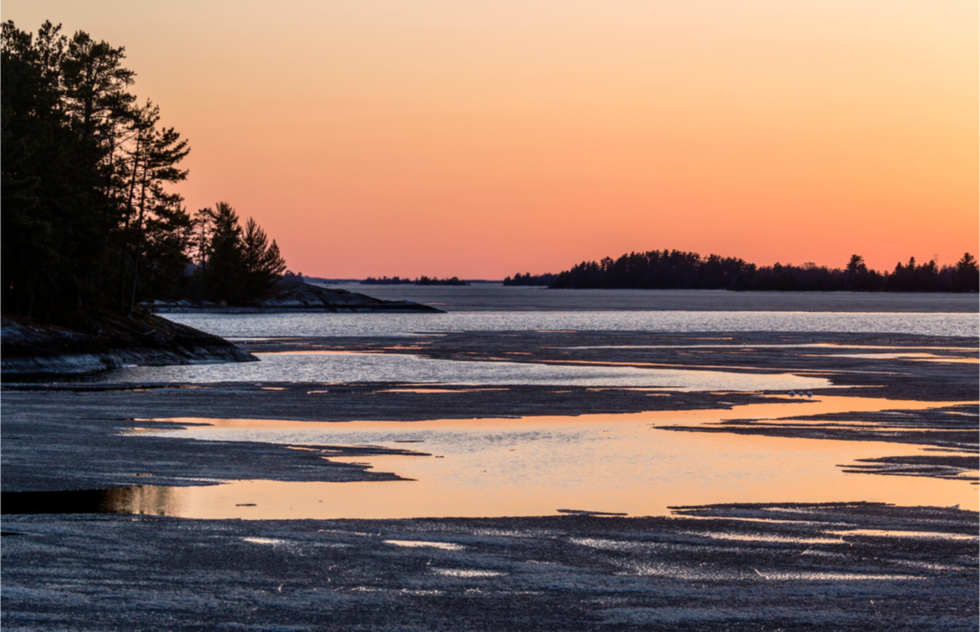 Ice fishing, snowshoeing, cross-country skiing, snowmobiling—if there's a winter activity you love or want to try, Voyageurs National Park in far northern Minnesota has you covered. There's a collection of groomed skiing trails perfect for beginners, and a pair of sledding hills introduce (or reintroduce) kids and grown-ups to the joys of combining winter precipitation and gravity.

For snowshoeing, the visitor center usually lends out gear for free. Other ways to immerse yourself in the landscape: winter camping (brr!) or simply staking out timber wolves and other critters.

In summer, a lot of transportation in the park is accomplished by boat, but in winter a changing array of ice roads connect different parts of the park. Consult the National Park Service website for crucial info on getting around. 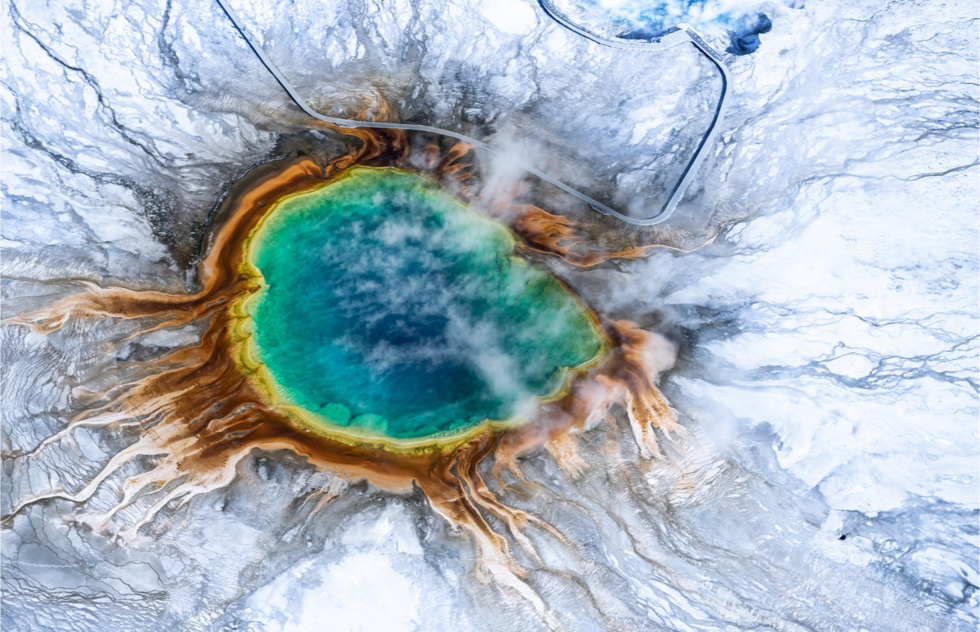 Yellowstone's thousands of geothermal features steam, bubble, burp, and gush even more dramatically in the colder months, thanks to the huge gap between temperatures above and below ground. Nearby trees turn ghostly white as misty clouds of steam coat branches and then freeze. The oily colors of Grand Prismatic Spring (pictured above) are handsomely offset by the white of the snow.

It's easier to spot wildlife this time of year because the animals are drawn to the warmth of the geothermal areas. (That's one reason why the park hosts some of its most in-depth wildlife education programs in winter.) Visitors can plant themselves in a few areas and know there's a good chance of seeing elk, bison, waterfowl, coyotes, and other beasts—and it shouldn't be hard to get a good view, what with the small number of tourists.

Granted, you won't be able to drive your own car into the park; only snowmobiles and snowcoaches can get around. And you'll have fewer choices for lodging and fewer entry gates to use. But those who experience Yosemite in winter are likely to find it worth the trouble. 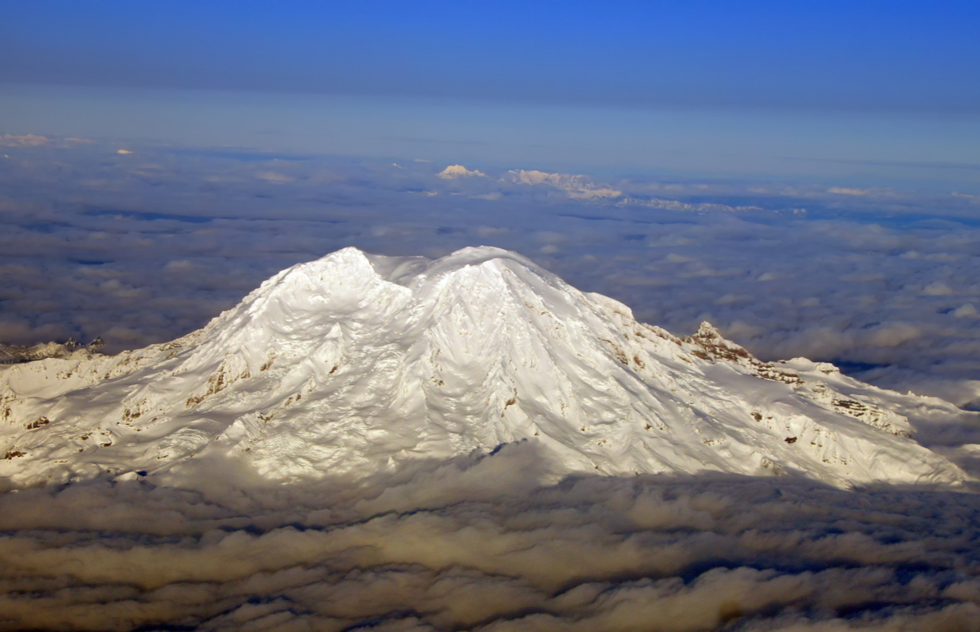 Mount Rainier's no-fee hut-to-hut Nordic ski trail system stretches across more than 50 miles of trails. The park also has downhill skiing and snowboarding as well as sledding for little ones and regularly scheduled snowshoeing tours led by park rangers. Snow tends to stick around well into spring, so if you're pining for an extension on winter fun, this is where to go. 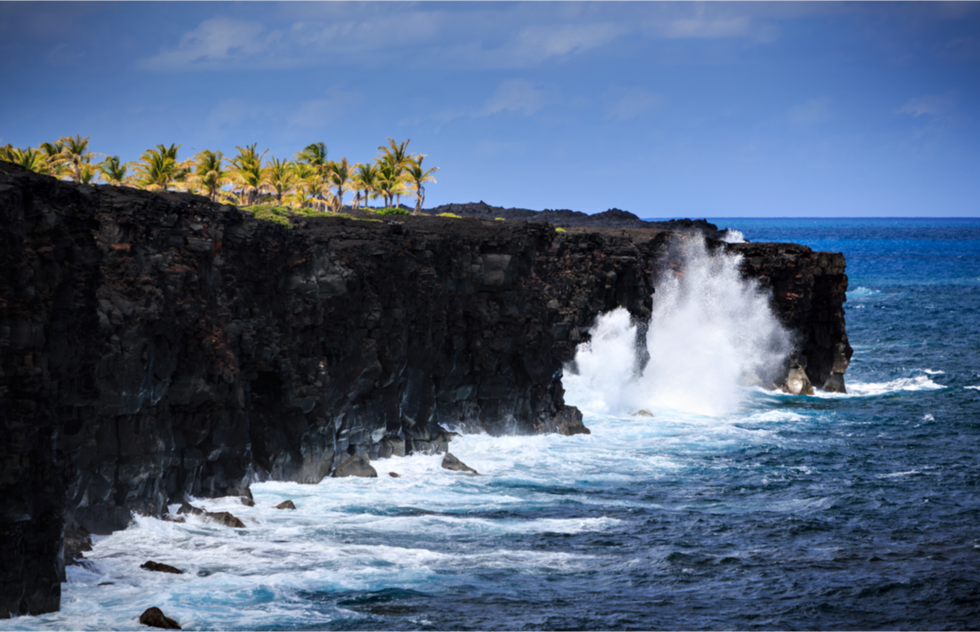 You never know when active volcanoes Kilauea and Mauna Loa will erupt on Hawaii's Big Island. There's a chance you could see the show of a lifetime as streams of lava pulse their way into the ocean.

But even if a volcano isn't acting up while you're on the island, this is a fascinating park to visit. Seven different ecosystems encompass alpine zones, rainforests, and rocky coastlines. One of the best reasons to visit Hawaii in December, January, and February is for whale watching. Due to migratory patterns, the waters are filled with the huge mammals.