Thank you for subscribing!
Got it! Thank you!
Home›Trip Ideas›Food and Drink›Where Was the Piña Colada Born? A Bar Fight Between Two Puerto Rico Tourism Icons 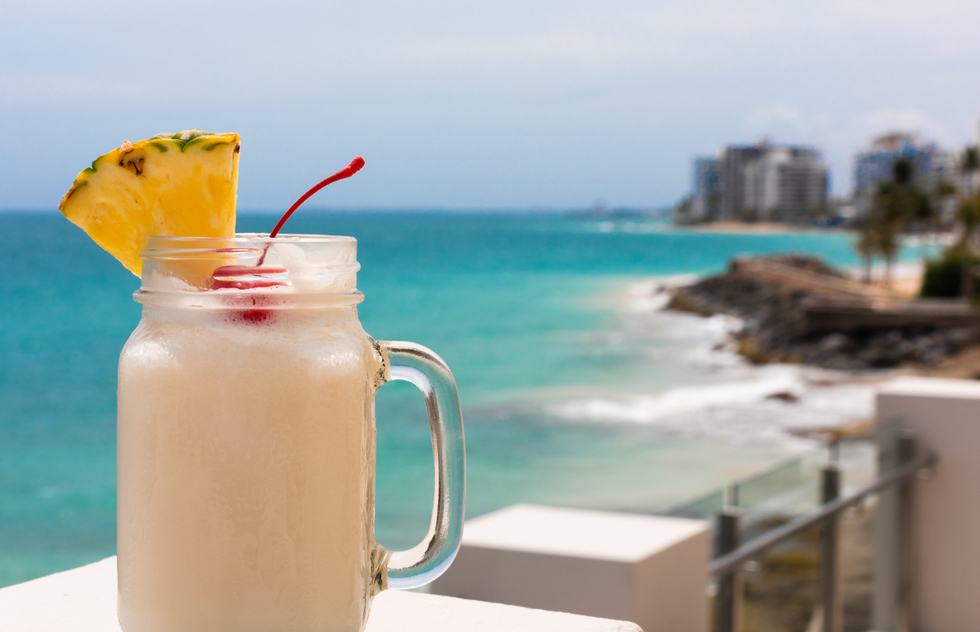 Where Was the Piña Colada Born? A Bar Fight Between Two Puerto Rico Tourism Icons

In San Juan, a historic hotel and a restaurant popular with cruisers both claim to have invented the boozy beachside beverage. Can we settle this dispute?

In Puerto Rico, where the fruity-frothy combo of pineapple, coconut cream, and rum is considered the official cocktail of the island, two different San Juan businesses—the Caribe Hilton hotel and Barrachina restaurant—claim to be the birthplace of the drink.

Both establishments date to the island’s mid–20th century “Operation Bootstrap” era, when Puerto Rico’s political and business leaders determined to transform the economy from an agricultural one dependent on the cultivation of sugarcane to an industrial one powered by manufacturing and tourism.

It was a time of surging affluence, modern improvements, and, often, abuses of the poor—you know, 1950s stuff.

Not long after Puerto Rico opened the gates to mass tourism, visitors began slurping down Puerto Rican piña coladas by the bucketful. And who could blame them? We’re talking about a creamy fruit smoothie with booze.

The cocktail’s most astute review remains the one delivered by Hollywood legend Joan Crawford, who, upon tasting a piña colada for the first time, supposedly declared it was “better than slapping Bette Davis in the face.” (And if Crawford didn’t actually say that, she should have.)

But where was the Bette-battery-besting beverage born?

When it opened in 1949 on a peninsula next to an 18th-century Spanish fort overlooking the mouth of the Condado Lagoon, the Caribe Hilton (1 San Gerónimo St.) held the distinction of being the first modern luxury hotel in Puerto Rico as well as the first Hilton built outside the continental United States.

It had a tropical, mid-century modern flair reminiscent of Miami Beach as well as considerable star power, attracting the likes of Sophia Loren, Rita Moreno, and Elizabeth Taylor, who spent part of a honeymoon here (she probably got the family discount—she had just married Conrad “Nicky” Hilton, Jr.). 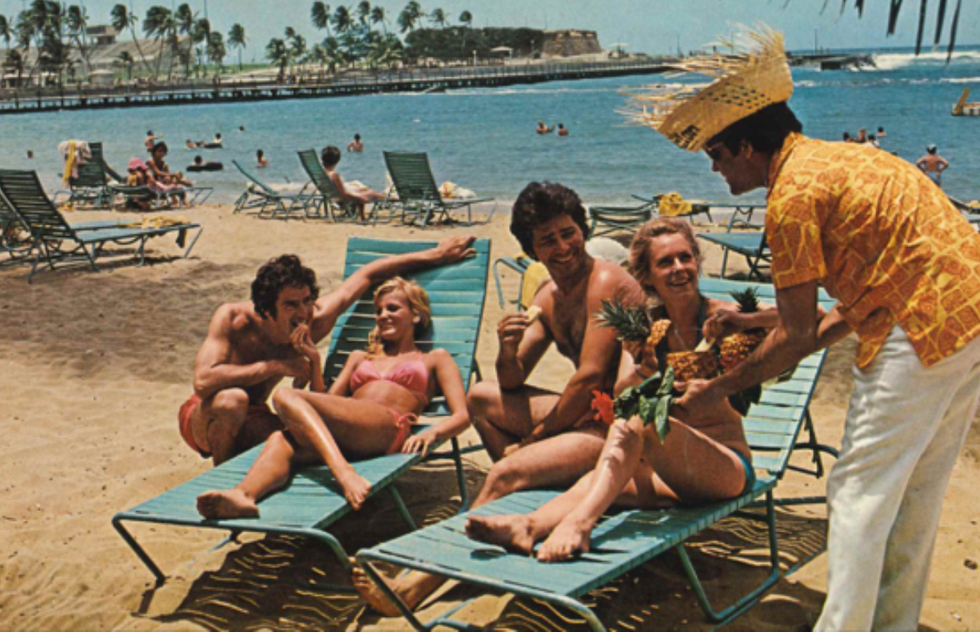 The place has undergone several expansions and renovations over the decades, most recently after Hurricane Maria did its damage in 2017. A $150-million facelift completed in 2019 brought additional fortifications to protect against storms as well as updated décor in soothing shades of blue and white to all 652 guest rooms, along with a new spa and dining venues (there are nine altogether). 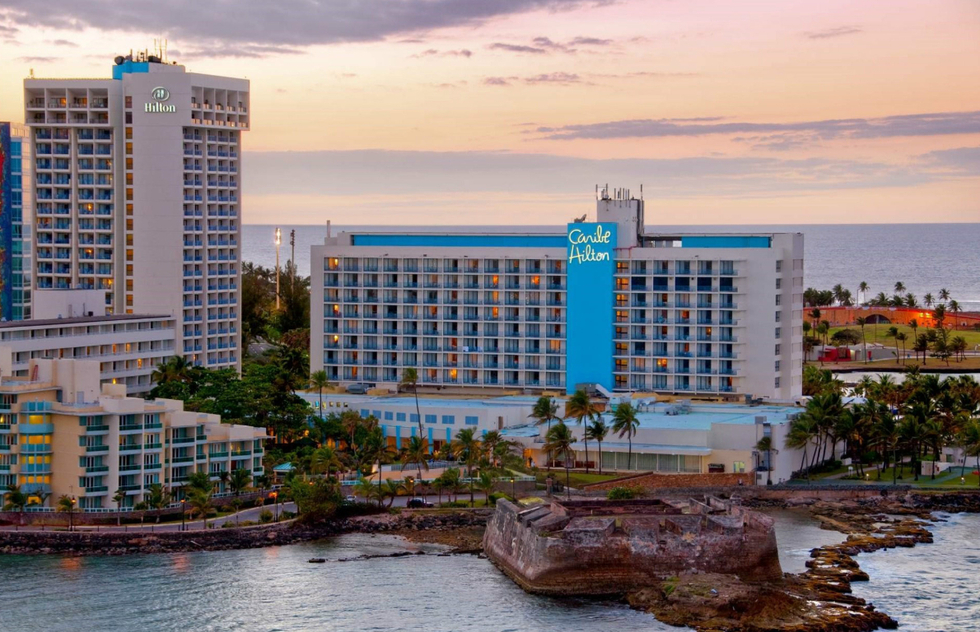 But the hotel has retained links to its long past as well. Displays of vintage photos in the lobby show off Eisenhower-era visitors sipping from coconuts and wearing straw hats. Parrots and peacocks still live amid the tropical landscaping as always. And Ramón “Monchito” Marrero’s piña colada recipe is still served at the bar.

In 1954, the hotel says, bartender Marrero came up with the perfect balance of ingredients after months of experimenting, and, to paraphrase the title of one of that year’s Oscar nominees, a star was born. 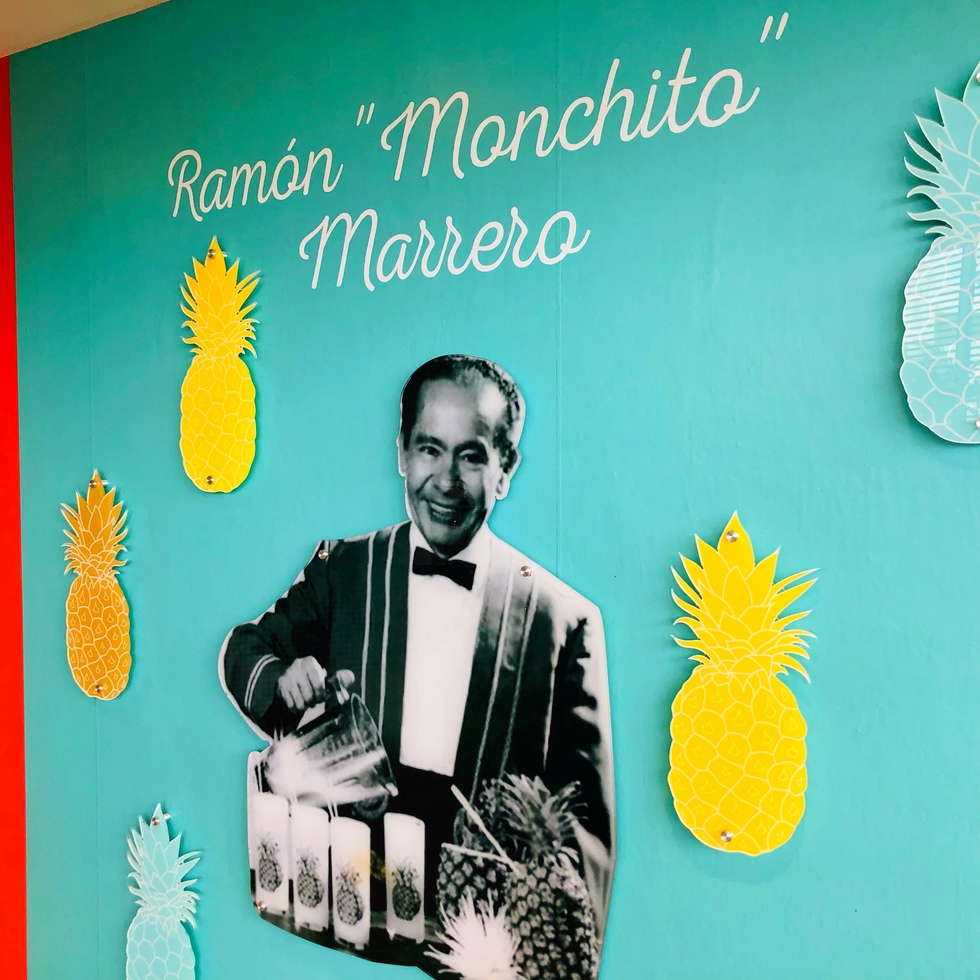 Marrero never patented the drink and, in fact, the recipe is emblazoned on a wall next to the bar, right next to its progenitor’s photo. You put 2 ounces of white rum, 1 ounce of coconut cream, 1 ounce of heavy cream, and 6 ounces of fresh pineapple juice in a blender. Add half a cup of crushed ice and blend until smooth. Serve in a 12-ounce glass, garnished with a pineapple wedge and a maraschino cherry.

The result: a drinkable dessert sweet enough to resolve the fiercest of Hollywood feuds (Crawford is supposed to have uttered her assessment of the drink, by the way, at the hotel's Beachcomber Bar, which was later replaced by a joint off the lobby called Caribar).

Marrero worked at the hotel for another 35 years, during which time the piña colada became a big international hit. As for receiving recognition, Marrero, who retired in 1989 and has since died, once told the Washington Post that cream-of-coconut maker Coco Lopez gave him a color television set on the day in 1978 when he sold his 3 millionth piña colada.

The company was kind enough not to take the gift back the following year, when Rupert Holmes released his Gift-of-the-Magi-but-with-adultery earworm “Escape (The Piña Colada Song).” 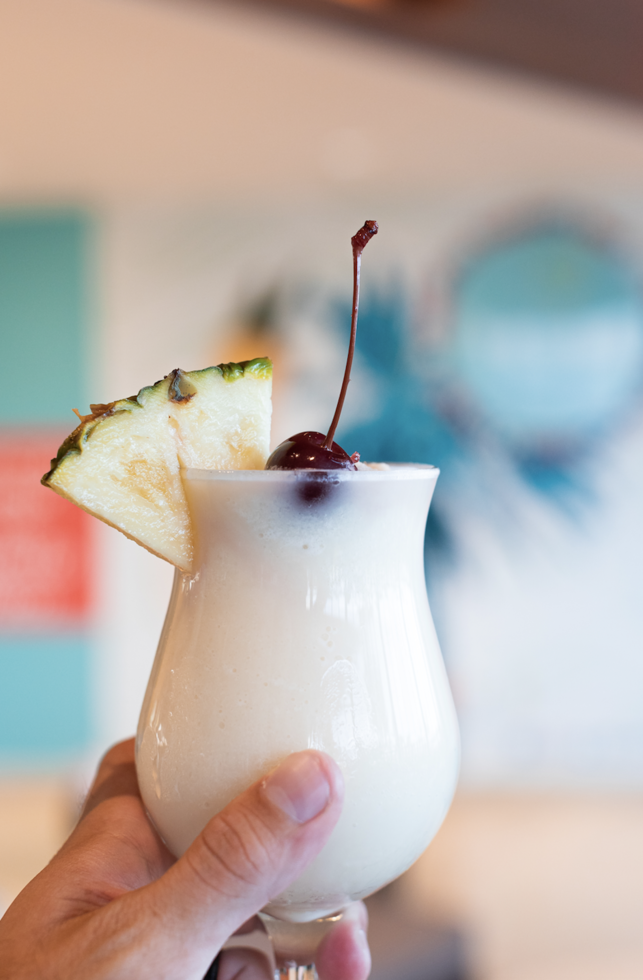 In 2004, Puerto Rico’s then-governor, Sila María Calderón, issued an official proclamation marking the 50th anniversary of the piña colada. Having laid eyes on the document, we can confirm that the text names Marrero as the cocktail’s creator and the Caribe Hilton as its place of birth.

Case closed? Not quite.

A little more than 2 miles west of the Caribe Hilton, amid the bluish cobblestones and pastel-colored Spanish Colonial architecture of historic Old San Juan, a large stone plaque outside Barrachina restaurant (104 Calle de la Fortaleza) heralds the building, in both Spanish and English, as: “The House Where in 1963 the Piña Colada Was Created by Don Ramon Portas Mingot.”

In contrast with the Caribe Hilton’s story about the drink’s origins, the plaque posits a different year, a different location, and a different Ramon. 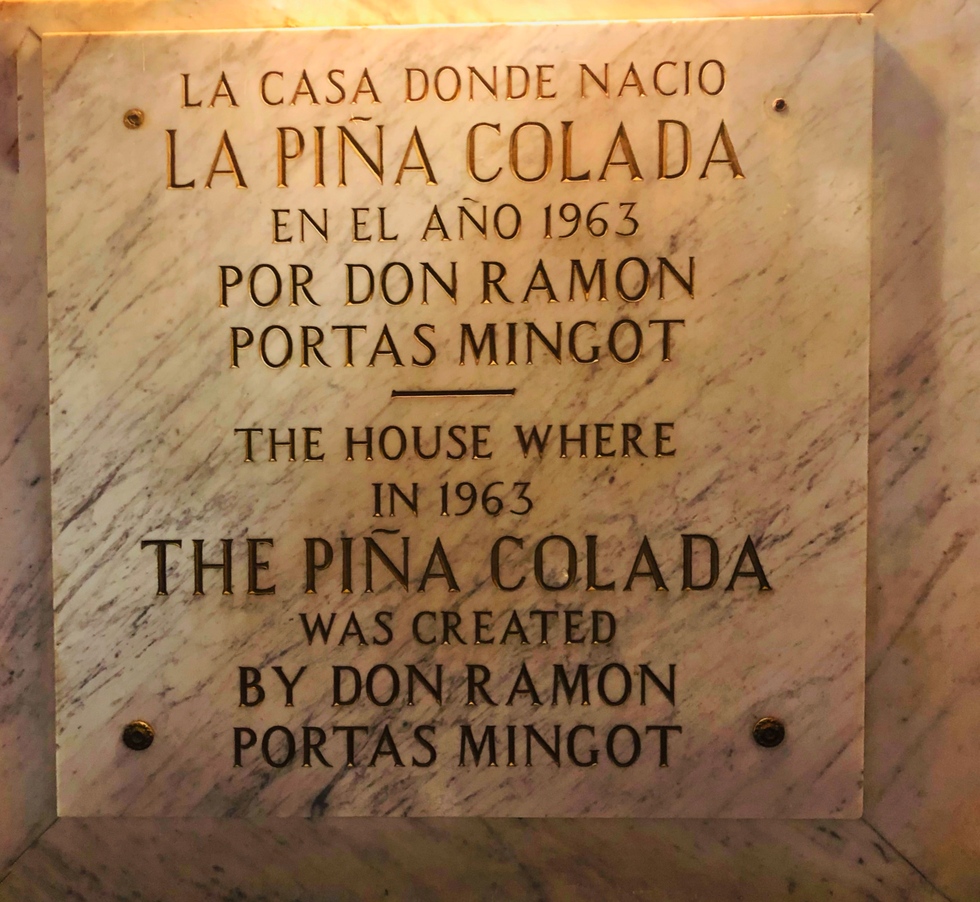 The restaurant is an unashamedly tourist-friendly spot with an indoor-outdoor layout made to look something like the leafy, fountain-dotted courtyard in a rural Latin American village. There are touches of Spain thrown in for good measure, including paella on the menu and a live flamenco floor show (not scheduled for the night we were there). Frozen piña coladas are served in milkshake glasses with little umbrellas, Love Boat-style.

The bartender on duty didn’t know much about piña colada lore, but later, over the telephone, head bartender Jorge Ayala filled us in.

In 1963, according to Ayala, Barrachina’s man behind the bar was Ramon Portas Mingot, a recent arrival to the island from Argentina (though the restaurant’s website describes him as a “traditional Spanish bartender,” whatever that means).

(You may also hear talk around town that the Caribe Hilton’s Marrero worked at Barrachina first and brought the piña colada over to the hotel with him, but that seems unlikely given that Barrachina opened in the early ‘60s, by which time Marrero had been working at the Hilton for several years.)

Barrachina’s profile is bolstered considerably by being located in Old San Juan, a beloved day trip setting for fun-seeking cruise ship passengers, who are more than willing to risk brain freeze in order to suck down a piña colada in the spot where it was allegedly first mixed.

“We were selling 2,200 a day before the pandemic,” Ayala claims.

Now, because Barrachina’s piña colada year zero is 1963—which is, our calendar tells us, later than the Caribe Hilton’s 1954—buying the restaurant’s claim to firstness requires believing that Barrachina’s version is the first true piña colada. 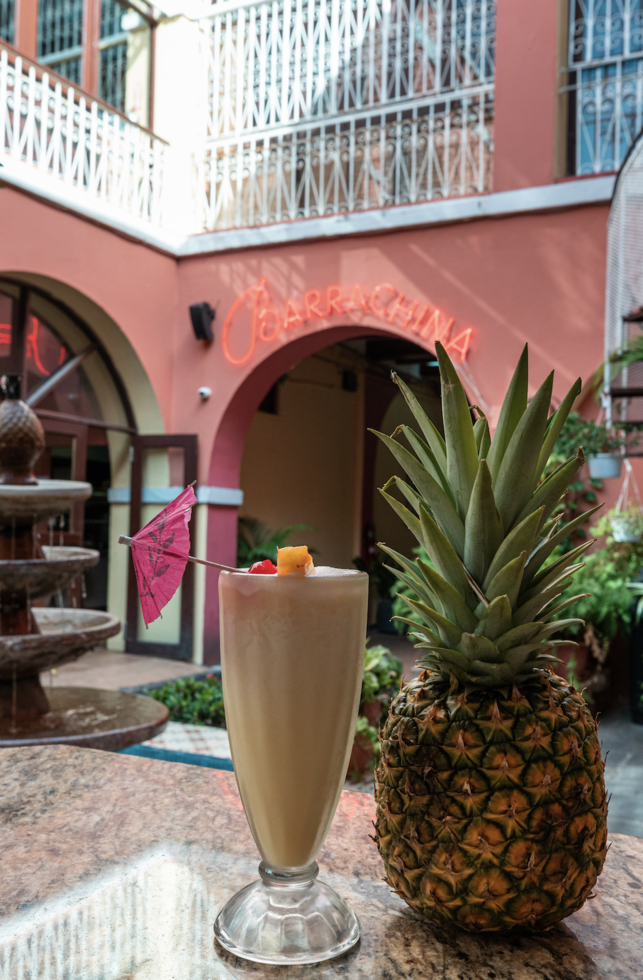 “People make two mistakes” when trying to formulate the drink, Ayala says. “They use too much coconut and they use ice.”

Barrachina’s drink, however, has far more pineapple than coconut cream, and the two ingredients are combined in a slush that’s kept churning in machines behind the bar, sort of like the frozen margarita contraptions at Tex-Mex restaurants.

The mix is poured over Don Q Gold rum and stirred to make the finished product, which won’t, the bartender says, get watered down by melting ice.

Not to mention that removing the blender from the equation makes the drink easier to distribute to hundreds of rowdy cruisers at once.

Barrachina’s fruit-forward concoction does offer an alternative to the Caribe Hilton’s creamier, foamier take. But does this make Barrachina's contribution a whole new creation or a variation on a theme?

Unless you want to split hairs and argue over the one true pineapple-to-coconut ratio, the evidence seems to support the Caribe Hilton’s claim that its bartender created the piña colada—or, in any case, the modern version of the drink we know today.

In 2017’s Rum Curious: The Indispensable Tasting Guide to the World’s Spirit, author Fred Minnick digs up newspaper stories from as early as the 1920s that reference piña coladas, beating the Caribe Hilton by three decades.

Most of the earlier versions are alcohol-free combos of pineapple and coconut, though Minnick does cite vintage references to adding rum into the mix. More alarming from the Puerto Rican perspective, reporters in the '20s describe the drink as Cuban (heresy!).

Hedging its bets, Puerto Rico’s tourism organization suggests the piña colada just may have been invented even before that, by Puerto Rican pirate and folk hero Roberto Cofresí (1791–1825), a noble-born bandit who has become, over time, a mythic figure thought of as a Caribbean Robin Hood. Hey, pirates famously like rum and Cofresí was a pirate, so why not?

With the past made murky by decades of barroom boasts, corporate promotion, tourist misinformation, and rum goggles, it’s probably impossible to deliver a final verdict on the cocktail's origins.

Can we declare a mistrial and head for the pool?

After all, even if neither Ramon—the one at the Caribe Hilton or the one at Barrachina—was actually the first soul on earth to find the magic combination that is a piña colada, the important thing is that both drinks are delicious and just different enough to demand a taste test to compare.

As the country music superstar and unheralded conflict negotiator Garth Brooks once put it: "Bring me two piña coladas. I want one for each hand.”