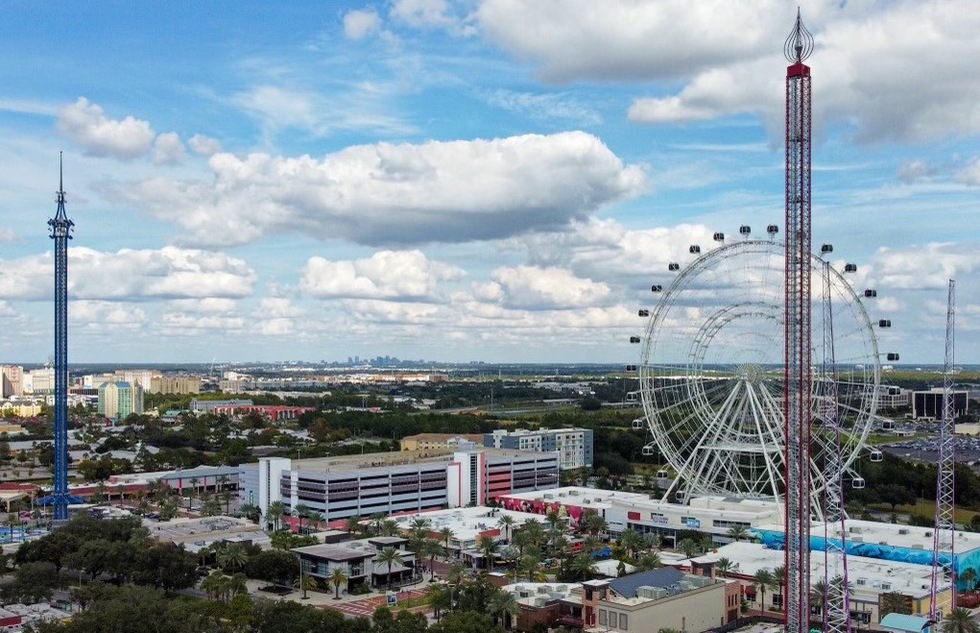 Update: In March 2021, a 14-year-old boy fell from the FreeFall and died. Investigators later accused the ride operator of manually altering the restraint system to accommodate larger riders, compromising safety. In October 2021, it was announced that FreeFall would not reopen and would be demoliished instead. SlingShot, operated by the same owners, has not yet reopend.

Orlando is known for amusement rides, but until recently, very few of them could truly be called terrifying.

The family-friendly market generated by Disney has inclined Orlando's ride designers to pull their punches, relying on theming more than screaming. Even Space Mountain, which is famous as one of Walt Disney World's most fearsome roller coasters, doesn't crack 29 mph.

The calm has ended. A duo of pants-wetters just sprouted on the Orlando skyline—and they're not inside either Disney or Universal.

One new addition is the Orlando FreeFall at ICON Park. On that, riders are seated on a ring that ascends a harrowing 430-foot-high spire. Once aloft, the ring rotates momentarily to take in the view (which, at that height, surely must include western Africa), angles seats 30 degrees forward for maximum angst, and then plummets almost 400 feet to earth.

It's advertised as the tallest freestanding drop tower in the world, besting the previous record holder, Zumanjaro: Drop of Doom at Six Flags Great Adventure in New Jersey, by 15 feet.

Take a virtual ride, if you can stomach it:

For perspective, no ride structure in Walt Disney World is taller than 199 feet, and Universal's own drop tower, Doctor Doom's Fearfall, only rises 184 feet.

The second newly added ride at ICON Park, Orlando SlingShot, flings two-passenger capsules some 450 feet in the air via wires connected to two 300-foot-tall prongs. We've seen this concept at fairgrounds and Six Flags across the country, but never at this height, which the owners claim is also record-breaking.

Longtime Orlando-goers might be familiar with an older, shorter version of the ride with the potentially confusing name of Orlando Slingshot located a few blocks north at the Magical Midway amusement center. The new, almost-stratospheric iteration of the ride is at ICON Park.

The two new attractions join the Orlando StarFlyer, which opened in 2018 on the ICON Park property.

That one is a swing carousel that lifts riders 350 feet up (on a 450-foot spire) and whisks them around on wires that a panicked mind would swear are woefully inadequate for the task.

Combined, the skyscraping contraptions are being marketed as Land of the Giants, although they're not enclosed in a ticketed area the way other Orlando theme parks are, and each ride charges separate admission.

The rides went up in a section of Orlando that's rising as a new center for family vacations: International Drive. Although I-Drive, as it's called, has long been home to the city's convention center, until recently most of the amusements here (miniature golf, go-karts, cheap hotels, and corporate restaurants) tended to be among the shabbiest in town.

But I-Drive, located between the Universal Orlando and Walt Disney World vacation empires, is undergoing a transformation. The shift began in 2015 with the opening of a major enclosed observation wheel, then called the Orlando Eye but now known as the Wheel at ICON Park.

Despite the sound of its name, ICON Park is not a ticketed area, but an open-air collection of food, shopping, and amusements. The Wheel was joined by outposts of Madame Tussauds wax museum and the Sea Life Aquarium chain along with a few upbeat restaurants and nightspots such as Tin Roof. The combo didn't take long to catch on with locals.

After the Wheel debuted, the Universal entertainment empire began bursting out of its previous borders and expanding all around the area: Universal's Volcano Bay water slide park opened a bit north of ICON Park in 2017, and the 2,800 value-priced hotel rooms of Universal's massive Endless Summer resort, located a few blocks north on I-Drive, finished coming online in 2020.

Now Universal's third dry theme park, Epic Universe, is under construction nearby for a probable 2025 debut—in fact, riders of FreeFall can easily use their ascent to survey the project's progress, if only for a few breathless seconds at a time before plummeting to Earth.

One ride on Orlando FreeFall costs $12 and StarFlyer is $13. Orlando SlingShot (videos on the website currently depict a different version of the ride) costs $30 each time, although discounts are available if packaged with tickets to other rides and attractions in ICON Park. Riders must be at least 50 inches tall for FreeFall and 44 inches tall for SlingShot and StarFlyer. Hours of operation for all are 10am–2am daily.